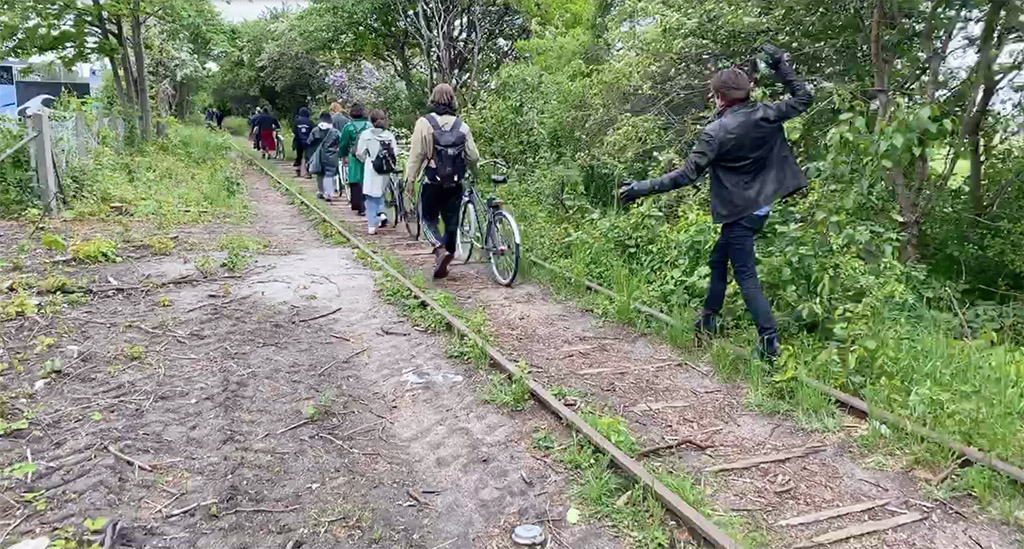 What does it take to re-stitch the relational fabric of the city?

During the 12-hour walk, I will visit places known and unknown within Amager and its surroundings. I will gather sensorial memories along the way informed by the current relationship of bodies, their rhythms, dynamics, constantly adjusting figurations and formations to an unpredictable future.

Every hour, every distance walked, every new point of arrival will be the base for a bodily expressed archive of new memories created from and with the public space. Memories shaped through the new conditions of our everyday existence.

I invite you to re-imagine the city during a silent walk together, along one part of the old railway “Amagerbanen”. An invitation to create new rhythms, new shared times, which we can use to orient ourselves in the fast pace of change.

We will walk together, keeping the necessary distance in between us on the basis of our awareness and responsibility towards each other. We will follow the still existing rails of “Amagerbanen”, but also the pathway of the no longer existing railway.

This walk invites you to look more closely at the urban landscape, details in places that you may pass every day without noticing. During the walk you might discover unusual, hidden or new aspects of the city. Buildings, sounds, movements, architecture, landscapes are places that hold collective memories, yet to be re-imagined. You are invited to an exploration with the help of your imagination.

The experience of the walk will last approx. 1 hour.

We have entered a new era, a constant waiting for the unknown. Our bodies and the body of the public space have been influenced by the exceptional present and new territories are manifested in the way we move and are being moved.

I started heading towards the airport. A salute dance for those with a long layover in the city of Copenhagen. They were on their way home. While dancing I was asked if that is Copenhagen. I was asked if I was also waiting to get home. There was nothing weird about that dance. Maybe I was stuck at the airport for a day, I could have slept there like others waiting to get home. Waiting for the normal to come back. Waiting to hear if my flight was cancelled or postponed. Dancing while waiting. Waiting together.

At the beach. The cold sand under my feet! Wet sand stuck on the hands. The sound of the waves. A group of friends meeting for their usual morning swim. They greet, I greet back. I was asked if I also came for a morning swim. A nostalgic dance.

A city which produces panic with the control of public spaces.

At Islands Brygge. Squares and restrictions. Playground of ruled spaces. How do I interact with my surroundings, what am I allowed to do? A little girl was watching. I performed for her. It was just me and her while her dad was searching for a book. We smiled at each other. As I was leaving, I turned back my head and I saw her engaging with the place in similar ways. We, together, created a new memory for that place. A different kind of engagement. A different kind of interaction.

The 5 circle bridge. I decided to stay. Passersby looked and looked back. The feeling of uncanny. Restless resting. Falling asleep.

Walking together through Amagerbanen – Creating memories of Shared Space

Wa(l)king Together! An invitation to a silent walk through Amagerbanen’s old railway.

A green wedge that connects to other green areas. A recreational area consisting of crooked housing, railway and industrial history, biodiversity and traditional allotment gardens. Qualities that are slowly disappearing from Copenhagen.

We followed the rails and continued following the pathway of the no longer existing railway, we arrived at a private garden and performed together. Together with each other and with the place. We performed for the passerby, for people that saw us from their windows. For the lady that stopped and asked if she could join us. The nature, the culture and history of Amagerbanen served as a base for our bodily expressed archive of memories that the place holds.

Kalliopi Siganou is a Greek-Danish choreographer and dancer based in Copenhagen. She graduated from the Danish National School of Performing Arts in Copenhagen in 2019, including an exchange at the Academy of Dramatic Arts in Zagreb.

She works nationally and internationally, currently creating projects with and for children, developing works in public spaces alongside performing with the Croatian based performing arts collective BADco.

Some of the recurring interests in Kalliopi’s works are the encounters of the body with other bodies, materialities and things, reshaping established relations between performance and audience, strategies of sharing, exploration of performance in unconventional spaces and locations, observation and experimentations around the movement of the public space. Kalliopi has created site-specific participatory and performative works as part of her ongoing research project “territory without limits”.