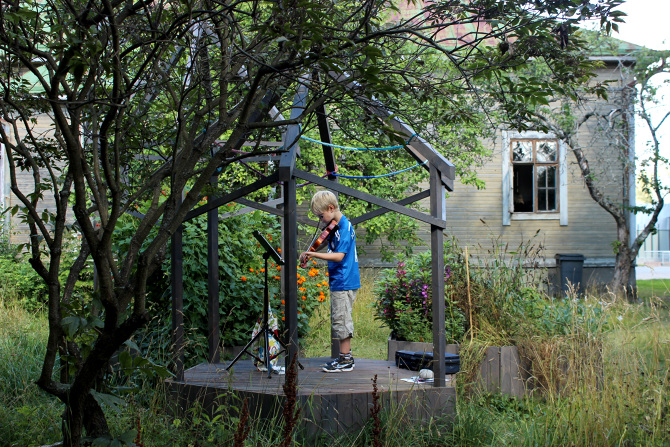 Co-Designing in The Public Space

RaivioBumann is a collective founded by Päivi Raivio and Daniel Bumann. Päivi Raivio is an artist-designer with a focus on different methods to improve public space with civil involvement. To achieve this Raivio’s work consists of public art, participatory design and site specific art. Raivio has worked with a range of different projects such as ”Kohtaamiskioski”  which is a platform-like unit of street furniture, which stands out in the surrounding environment and can be used as a meeting point, a pop up kiosk and a public art work open for everybody in Kalasatama-district, in Helsinki – or interventions as ‘Julistus-workshop‘ at ‘Ihme Festival’ where participants plan, print and distribute posters in the city.

The second part of the collective, Daniel Bumann, is an designer and artist with a focus on developing solutions to make ideas work in real life. RaivioBumann’s works focus on making the public space more inclusive and interactive through a tool kit of methods. Their aim is to develop the identity of public space and built an environment to bring out the hidden potential of such a place. The collective works with different agents such as municipalities, architects, institutions and developers. 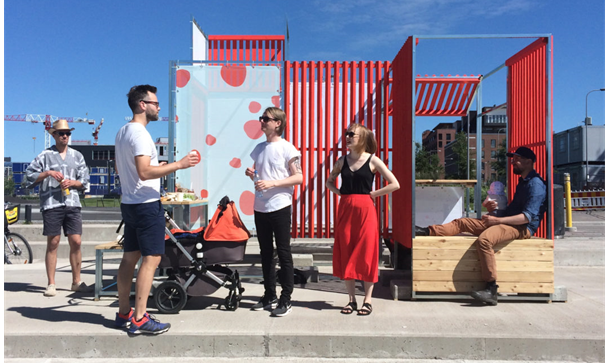 ”Kohtaamiskioski” a public art work open for everybody in Kalasatama-district, in Helsinki 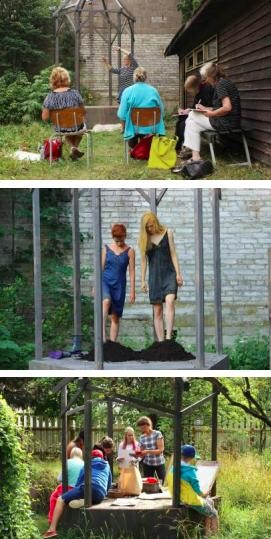 During the workshop at Nordic Urban Lab 2018, Raivio introduced different projects and case-studies, which RavioBumann has worked with – to engage a “learning café workshop” at the conference, where participants discussed three topics concerning art in public space: continuation, scaling up and from temporary to permanent.

One of the presented projects, was the site-specific case of Tunne+Tila, 2014. It is a series of site-specific environmental installations in abandoned public spaces in three different cities during 2014-2016, funded by Kone Foundation and produced by MSL – Union for Rural Culture and Education. The first installation in the series was situated in the garden of a city-owned abandoned house in Rauma.

The idea of the installation and it´s pavilion frames was to activate the empty building and its surroundings and community. By placing this installation in the public space, this project was a strategic move by RaivioBumann. The project was practice-based and the method they used in this case were field notes and getting contact with people and involving them in the process.

The installation invited people to stop and linger in the wild garden. Activating the space the installation gave it a temporary identity and sparked discussion among the habitants of Rauma about the future of the area. Edible plants were planted in the garden, which were grown and planted by children from local schools and taken care by local youth throughout the summer.

By taking a hold on the space around the house first, and building on its features, RaivioBumann wanted to recreate a sense of ownership to the space. They looked at the cultural history and the common memory, that was attached to the building, to find the best way to use the space around it.

Over two summers the garden around the house was a platform for nine installations of pavilion frames. RaivioBumann built the pavilions themselves on site, but the most important step in their process was to talk to the citizens to get them involved in the process.

They invited schoolchildren from different age levels to get them involved in the urban gardening. During the summers there were events organized in the garden and there were more and more people coming to the site. In the end of the project they arranged an pop-up event where they invited people inside the house, which resulted in hundreds of people coming to the event during the weekends when the events took place. 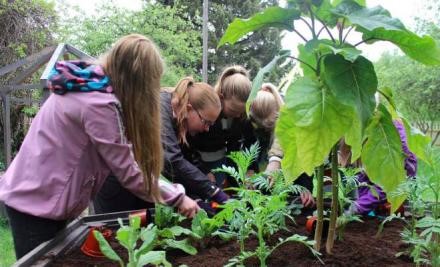 THE CHALLENGE OF TEMPORARY PROJECTS

During the weekends they also arranged a panel discussion about the future of the building. Questions like “could this be a place for artists to live in?”, was being brought up. Through this project there were a variety of people coming to the site either to get involved in the process or to be in the space created by RaivioBumann.

Raivio adds “It’s a long process” creating these kinds of projects and for them to evolve.

By 2017 the building got repainted by volunteers but the problems regarding what to do with the building is resurfacing, and the questions that were being asked during the project, are still the same.

The city would gladly give the keys to anyone who would want to rent the house, but no one is volunteering to rent it. Raivio believe it’s because of the lack of resources, that the city has to renovate it. The building lacks running water and electricity, and with the scarce funding in the cultural sector, Raivio doesn’t see that any group would have the resources to takeover the place.

Raivio continues to talk about the results of this project, where she mentions that there were an increase in community and participatory action and that the building got restored and that’s a valuable step in itself. People were feeling that they did something valuable for their community. But the questions about what the next step is or who will own this place is still ongoing questions.

By the end of the presentation at Nordic Urban Lab, Päivi Raivio, Antti Karjalainen, Director of Community for Kalliola Settlement (FI), and Pia Rantanen who is an architect working for the City Planning Office in Helsinki, had a panel discussion before the group discussions.

During the panel discussion questions were brought up about the void that appears after a project is finished and how this affects the space. Raivio stressed that the void doesn’t only appear in a physical form but also in people’s minds. Citizens who get interested in a project and don’t immediately get involved, can miss out on a project when it’s only temporary, and then you may lose some of the participatory design you want in a project.

Karjalainen who has worked with both smaller and bigger communities in Finland said that you could view the void that appears after a project. The space becomes a platform for another project. Rantanen added that it is a pity that a good project, that is temporary, gets taken away – but sometimes the process in itself has greater value than the physical project. 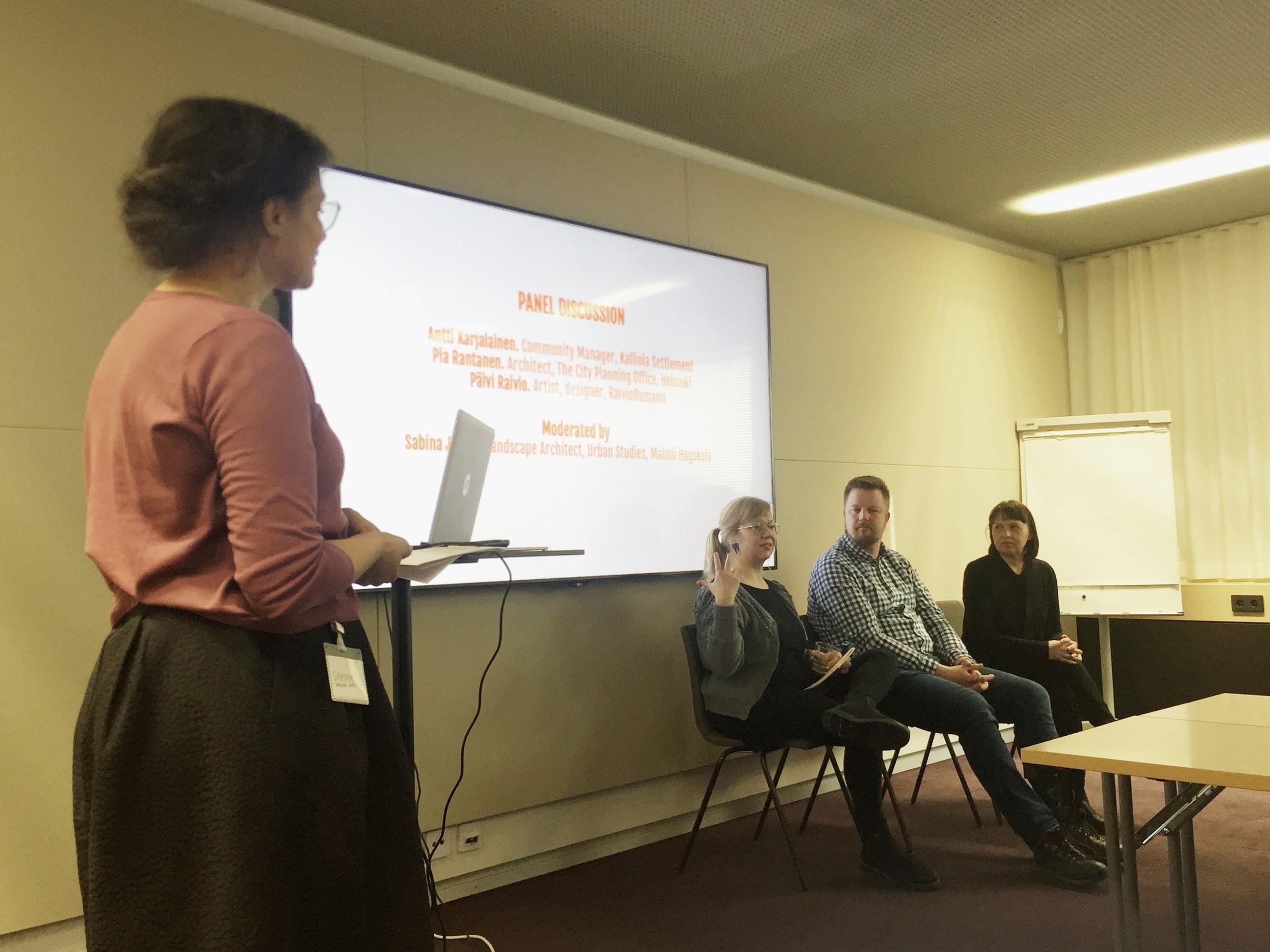