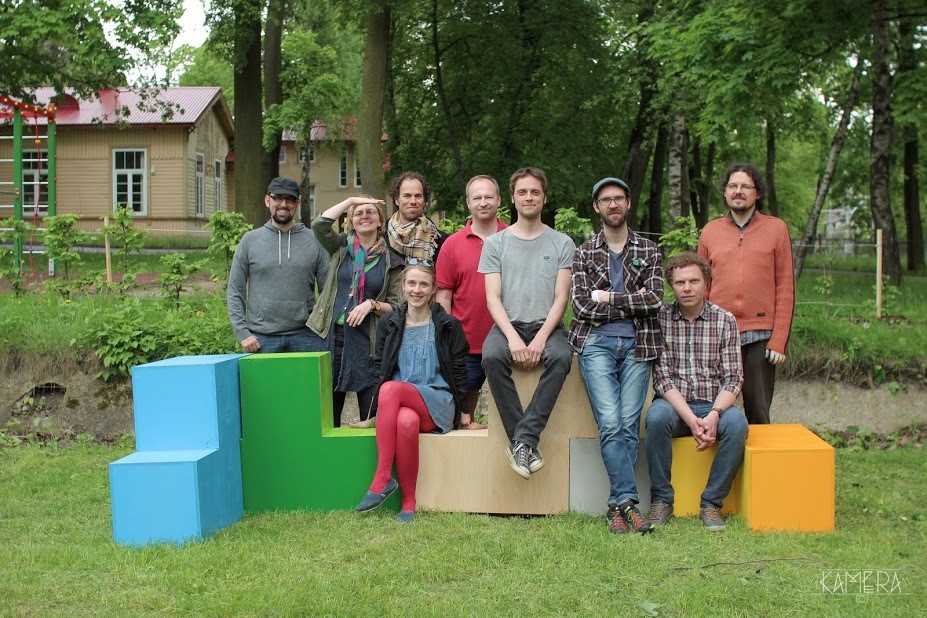 Playing Games in the Public Space

“To share our time together, is the most valuable resource we have”.

Jekaterina Lavrinec is a professor in urban studies at Vilnius Gediminas Technical University, and is the co-founder and curator at the non governmental organisation Laimikis, Vilnius. Laimikis is a laboratory for urban games and research and aims to engage public spaces in a playful way. The aim is to use urban games as an approach to research the full potential of public spaces – both socially and spatially. Lavrinec identifies what a game actually is and its requirements;

“Games are a very powerful tool”

Lavrinec claims that urban games can function as an alternative system of navigation in public space. It can expand our ability to act in space. It has the capacity to change the collective behaviour. We need to practice our ability to be free from rational boxes and we need to use things in more spontaneous ways.

When we go out, and take the same route everyday, our experience are being narrowed. In a sense we limit ourselves from new expressions and its easy to be blind for our nearest surroundings. Let’s explore the city we visit, live and reside in.

By following the rules of an urban game, it challenges you to move, and look at the environment in a different way of which that you are used to.

The context of urban games can vary. Lavrinec exemplifies different kinds of playful, interactive urban games in different places and cities. But they all have the social interactions, shared interests, new roles and new interconnections in common. And they try to combine things that one may think is uncombinable and to expand our understanding of public space. To engage people into exploring more than they are used to. And to understand the connection between the social and the spatial.

Games need space, and urban scenography can be changed, depending on how the people are using the space. An object can make people stop, but the object needs people to interact with it, in order to affect the choreography and navigation of a space. By co-adjusting public space we set certain types of relations. Social practices are spatial, they are embedded in space and creating the public space. For example a can a notice-board create a meeting place, because it is an indication to stop.

Jekaterina Lavrinec continues the presentation with examples on how to combine the spatial and social in a playful way. “Jumpology” (2009) was a project inspired by Philippe Halsman, a photographer who was active in the 1950’s, and took pictures of famous people, actors and politicians while they were jumping. The idea was that, in the moment of the jump, the person behind the famous mask becomes visible. “The social status, becomes irrelevant”. The photo shows the “real” people, not the political or famous masks.

The experiment is very much based on trust. Trust is a condition of a social life; for example when approaching, or being approached, by strangers.

Micro-practices are a light form of sociality. People understands anothers micro gestures unconsciously. We have a collective consciousness in terms of an unspoken set of rules on how to behave in public spaces. This becomes clear when someone breaks thes unspoken rules, by for instance being very loud or uses big gestures. ”Therefore micro-practices can be very small, but also very effective in creating a reaction”.

Lavrinec gives us some examples on micro-projects that has been practiced in the public space. The tweenbot, which was an experiment at Washington Square Park, NY, 2012, by Kacie Kinzer. The tweenbot was a miniature robot that could only move in one direction, forward, and the experiment was to see how many people would interact with, or help, the robot in its journey to crossing the square. This was also interesting from a sociological point of view, since the interactions between humans became visible through a physical object. The humans were interacting together through the robot. 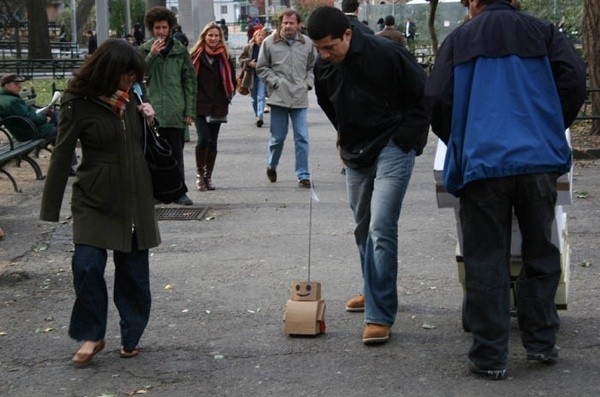 Micro-protest was a project, which aimed to engage the citizens, and give their ideas on how to change Lukiškių square, Vilnius, 2012. The idea was to let any by-passer write a message on miniature signs. The material attracted pigeons, so people started to write messages as; power to the pigeons! So it became a fun and humoristic way to involve the citizens. 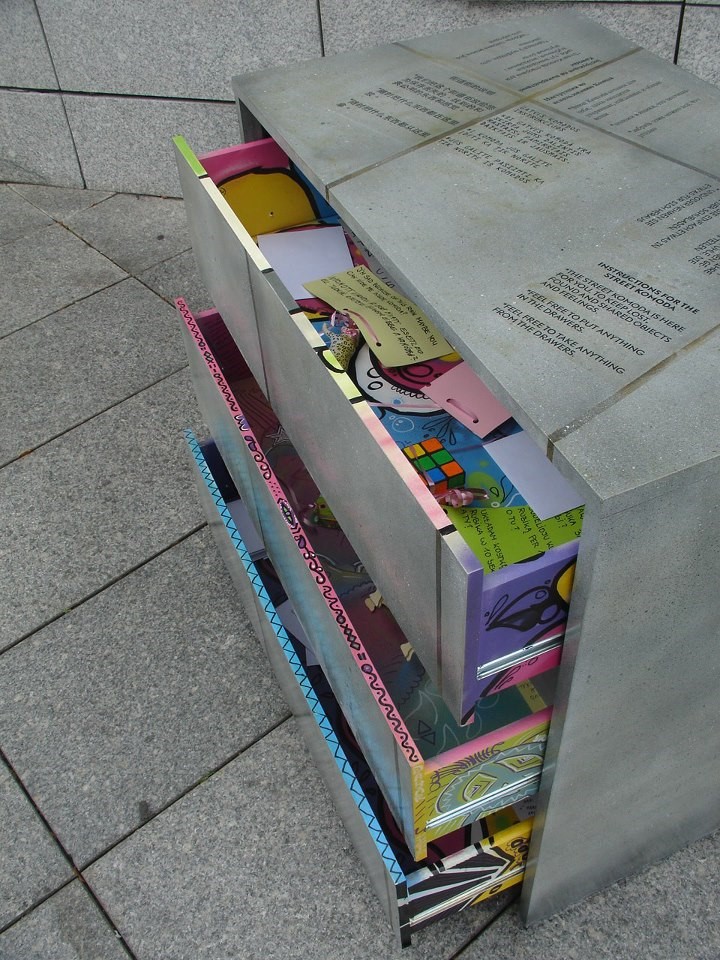 Street Komoda (Vilnius, 2012) was a project based on the idea; take something – leave something. The komoda was an urban furniture which were designed as a site-specific object, it was a sort of drawer/cabinet that had similar material as its surroundings. It is a place to share things. It ended up being taken care of, and promoted by some people who were practicing parkour in the nearby area. A local music band used the komoda to promote their music. It became a spot to stop and talk, a meeting place.

‘Open Code Urban Furniture’, was a project inspired by the well-known game Tetris. This project was workshops in co-design in four different neighbourhoods in Vilnius. The aim was to create playful spaces, and allow people to arrange the space as they needed. It was also a research project, in terms of what materials and design to use in public furniture and how to establishing trust and safety.

For example in some blocks, there were drawers, but in some areas they didn’t want drawers because the fear of what people would put there, trash etc.

It was also a research project in the process of co-development and how to use co-design as a tool in public space. People also had their own ideas of how to use them, for example some children wanted painted chessboards on the modules . 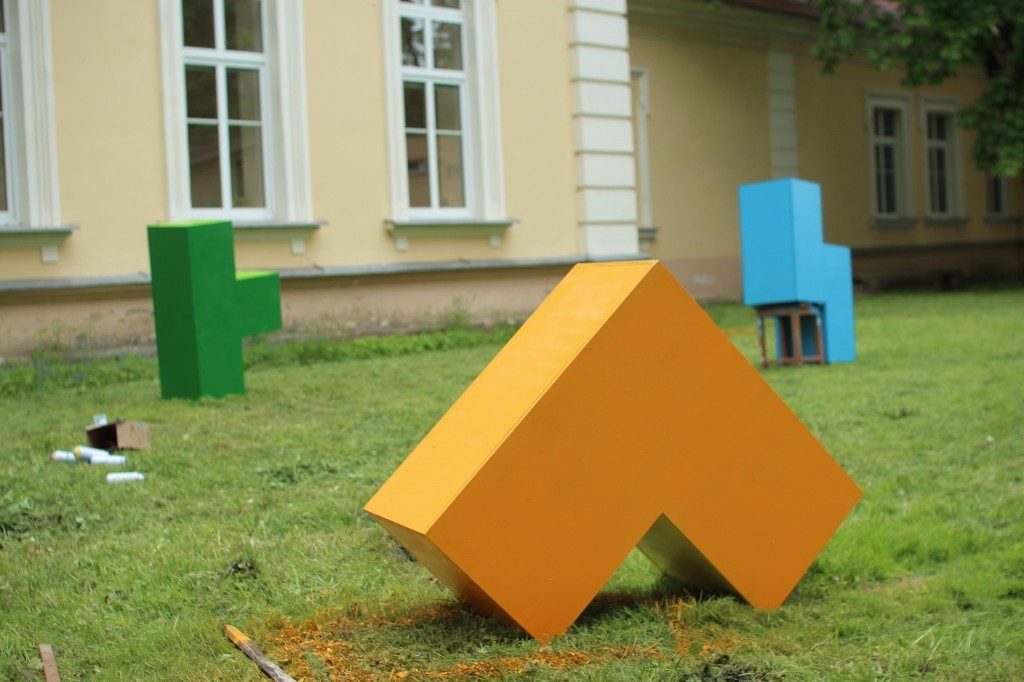 Not only micro-practices can have a big effect on the use of public space. To ‘go macro’ can be an effective way of for example protesting, putting up big-scaled letters in a specific site.

Going macro with moveable big letters can also be a way to reconfigure space. Tangible text is a playful design, which can invite to interaction.

URBINGO – Cooperation as a Craft

URBINGO is the game invented by Laimikis and is a matrix for collecting stories and images of the changing neighbourhood. The game is actively used and you play with visual cards that gives you smaller missions, to find something or to interact with someone. If you start approaching people you rearrange the social space!

SEE HOW TO PLAY URBINGO HERE

Urbingo focuses on the eye-level, how do you see the city? How do you experience it? It makes people slow down going through the cities, but also encourages them to walk more.

Urbingo opens up the neighbourhood and the number of fans are growing. Wherever you go, there is something to see. The game is giving a reason for people to go somewhere and to remote neighbourhoods. It is analog, but the sites in the game are photogenic, so social media are included in an indirectly way. It is also connected to emotions, because when you start to collect things in the game, you get involved and passionate.

Right now it is used mostly by families and youngsters, whilst elderly have provided stories for places. When the game was created, it was the locals that providing the stories.

Lavrinec ends her presentation by calling to action by encouraging people to always bring some playing cards in your pocket;“when you feel your life is too routine, pick up a card!”