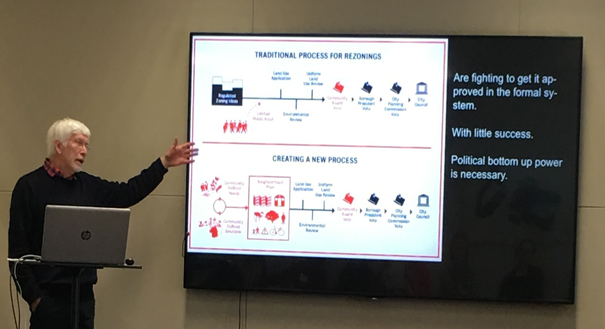 Peter Schultz Jørgensen has written the book “Byer i opbrud – om det anti-fælles, det fælles og det næste samfund” (2017) (Breaking cities – about the anti-commons, the commons and the next society). The book stresses the need of the citizens to put themselves in the center of change, in the small scale as well as in the scale of the municipality.

In a time dominated by a complex of crisis (the crises of civilization) – economical, ecological, human and democratic – the most serious crisis might be our ability to imagine what the next society could be. As it has been said: 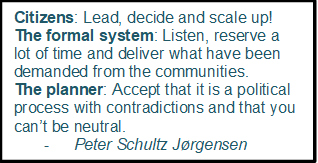 Fragmented commons is not enough in a situation, as David Harvey writes in his book Rebel Cities: “Urbanization is about the perpetual production of an urban commons (and its shadow-form of public spaces and public goods) and its perpetual appropriation and destruction by private interests.” The anti-commons dominate the commons, but there are many objective and subjective factors for the commons stimulating our imagination and pointing into the next society.

The stakeholders of the presented case by Peter Schultz Jørgensen, at Nordic Urban Lab, are the citizens-driven organizations and platforms created to uncover and develop the needs of and solutions for each specific neighborhood.  The political platform in Barcelona is BComú which is neither a political party org just a movement.

Because of the building boom in Spain until the crisis hit in 2007/08, almost 3,5 million residential properties were unoccupied. And because of the crises, 2008–2016 in Spain, more than 695,000 mortgage foreclosures resulted in more than 327,000 evictions.

In 2014 some of the PAH-members, people from the former M15 movement, unorganized individuals and people from other urban social movements decided to create a political platform for the upcoming municipal election May 2015. 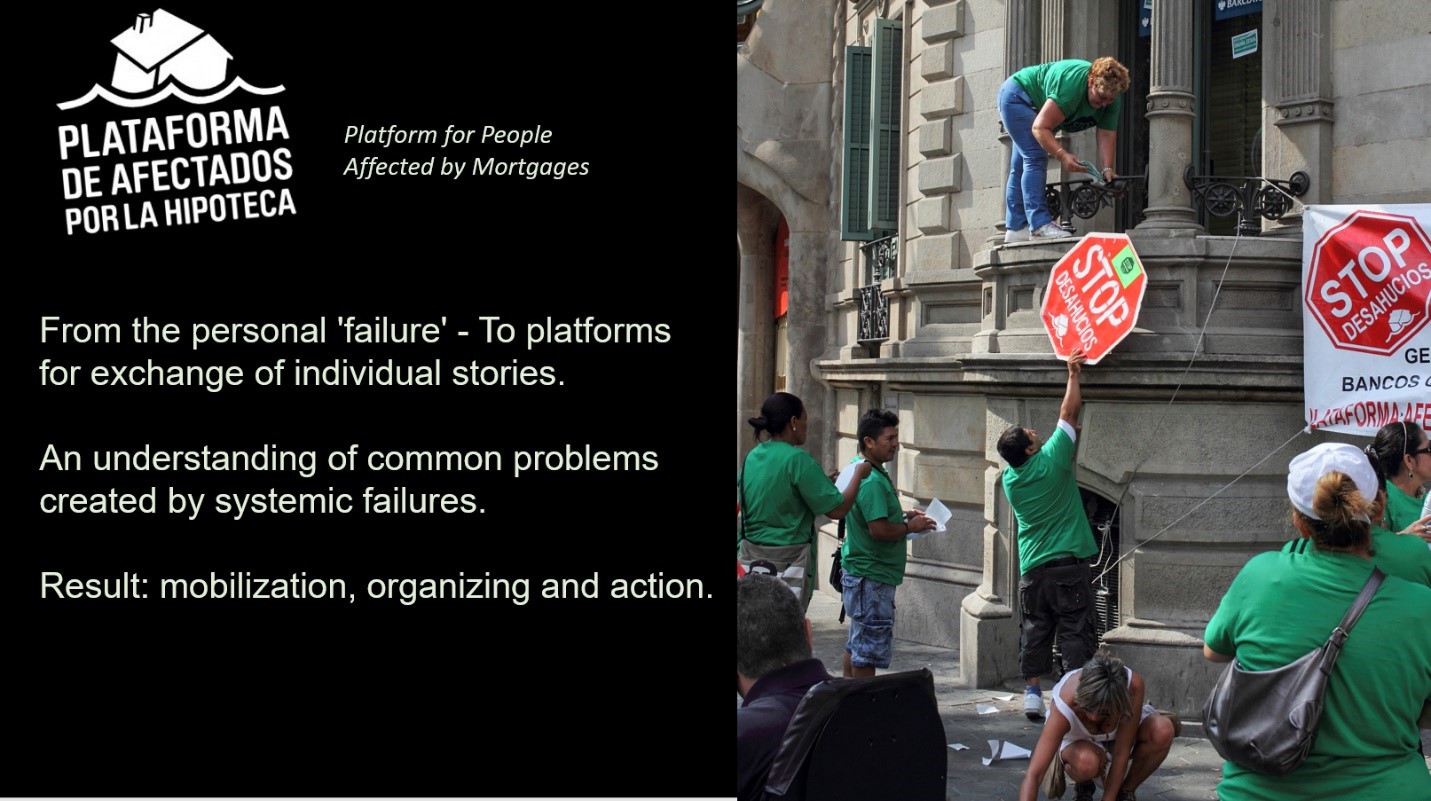 Slide from Schultz presentation; PAH protests the banks’ evictions of people from their apartments.

“Plataforma De Afectados Por La Hipoteca” (PAH) became the platform for the evicted or people threatened by eviction. In Barcelona and other cities some of the evicted people began to organize platforms where they could meet and tell their individual stories. Doing so they realized that their problem was not caused by personal failure.

They created collective narratives unraveling systemic failures. It was common problems caused by systemic defects. From this they formulated demands, organized protests and blockage of evictions etc. They develop assemblies that unleashed the collective intelligence. This still takes place every Monday evening in Barcelona.

Barcelona en Comu´s (BComú) (Barcelona in common’s) invitation to all the citizens was titled ‘Lets win back Barcelona’:

“A victory for Barcelona en Comú could serve as an inspiration and a model for citizen movements in the rest of Europe and beyond. The citizens of Barcelona have the opportunity to make their city the capital of a democratic revolution that people across the world are yearning for. Let’s win back our cities, let’s win back Barcelona on May 24.” And: “We want to do this collectively, so that citizens of the city are the protagonists in the construction of public policies, and words like participation’ and ‘transparency’ mean something again. We want a city council that governs by obeying its citizens.”

The invitation is an answer to the unequal development of the city, corruption, unemployment etc. “Barcelona is a global city in danger of converting its social, cultural, historical and architectural heritage into a showroom at the service of neoliberal policies. This is undermining life and social harmony in the city. Today, the right to the city of the women and men of Barcelona is at risk.” 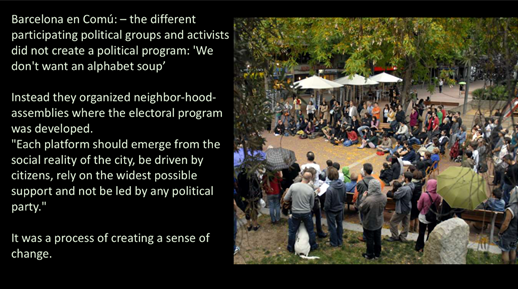 Instead of negotiating compromises, they went to the neighborhood- and plaza-assemblies where the electoral program was developed. “Each platform should emerge from the social reality of the city, be driven by citizens, rely on the widest possible support and not be led by any political party.” It was a process of creating a sense of change.

The result of the election was that BComú won 11 out of 43 seats in the City Council. The PAH spokesperson Ada Colau became the new mayor in Barcelona.

–        Tourist strategy 2020: Stop new hotel construction in the historic center – decentralizing the activities. Closing down illegal tourist-apartments and fining Airbnb. Tourism as a benefit for the neighborhood economy though cooperatives etc. etc.
–        Re-municipalization of energy and water and technological sovereignty.
–        New design and improvement of public spaces which fits to the needs of different kinds of citizens – not at least women and families.
–        Acquisition of buildings and construction of affordable housing. Fining Airbnb and taking tourists apartments back to the housing stock.
–        Executing social neighborhood projects etc.
–        Private vehicles account for 20% of total movements in the city today and occupy 60% of the roads. Superilles (superblocks) are tested in the area of the city based on Cerda’s grid-plan. ”Democracy and public space are not the finishing line but rather the starting point…. we need residents which make the streets and squares of our city their own.” – Ada Colau. 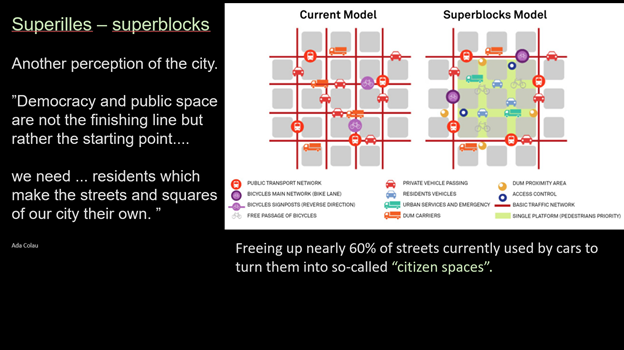 The methods Schultz describes is basically scaling up grassroot-initiatives, local citizens-driven actions throughout the cities. The citizens took actions like neighborhood and community assemblies, demonstrations in public spaces, squares and streets. Local platforms and open meetings are essential along with the redistribution of power from the city council to the neighborhoods.

People can and do – organized and by using their collective intelligence – define their common needs and their common solutions, but to be successful and achieve citizen driven changes they need political power. Both on community level and at the level of the municipality.

Also they need hope, the sense for and the imagination of a social alternative. As Ada Colau – Mayor of Barcelona – says: “We are living in extraordinary times that demands brave and creative solutions. If we’re able to imagine a different city, we’ll have the power to transform it”.

Schultz points out that political bottom-up power is necessary. Bottom-up in the sense that people in the neighborhoods took a part of the power via their elected representatives when the activist Ada Colau became the mayor of Barcelona. The development of further democratic structures in the neighborhoods is an essential priority. Until now this have been relatively successful in Barcelona and other cities in Spain, even if the challenges are huge.

The municipalities, neighbourhoods and the citizens constantly needs to remember what David Harvey expressed in his book “Rebel Cities” in this way:

”… what kind of city we want cannot be divorced from the question of what kind of people we want to be, what kinds of social relations we seek, what relations to nature we cherish, what style of life we desire, what aesthetic values we hold. [….]  The freedom to make and remake ourselves and our cities is, I want to argue, one of the most precious yet most neglected of our human rights.”

–        The municipality need more rights and tools from the central government in Madrid. Including the right to decide larger budgets.
–        The bureaucracy in the municipal administration.
–        Attacks from the old parties and the media.
–        Exhaustion of the movement.