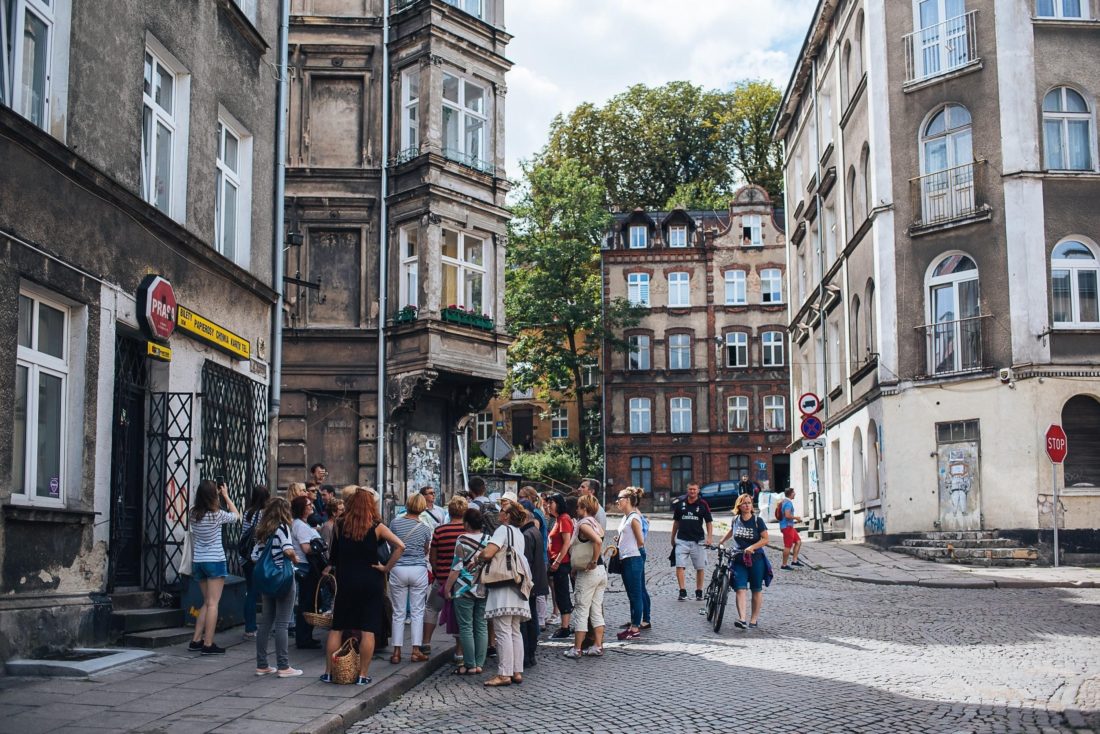 The presented cases at Nordic Urban Lab 2018 were led by Aleksandra Szymańska, the director of City Culture Institute in Gdańsk and Natalia Brylowska, cultural researcher and manager. Their work aims at strengthening the relationship between city and citizens and engaging people in co-creation processes using cultural tools.

The presented cases are conducted in Gdansk, Poland between 2009 and 2017. The cases presented include, festivals, local guide tours, public squares and neighborhood days. The differeret projects had both long term cooperation and short term interventions: some of the cases were held only once, but some cases lasted for years and some are still held annually.

The cases often involved local artists in the making-of phase and citizens could then participate in creating the outcomes of the cases. The main challenges Szymanska and Brylowska faced were mostly about having support from the City to sustain the effects of the projekts (people, maintenance the place, security and so on). 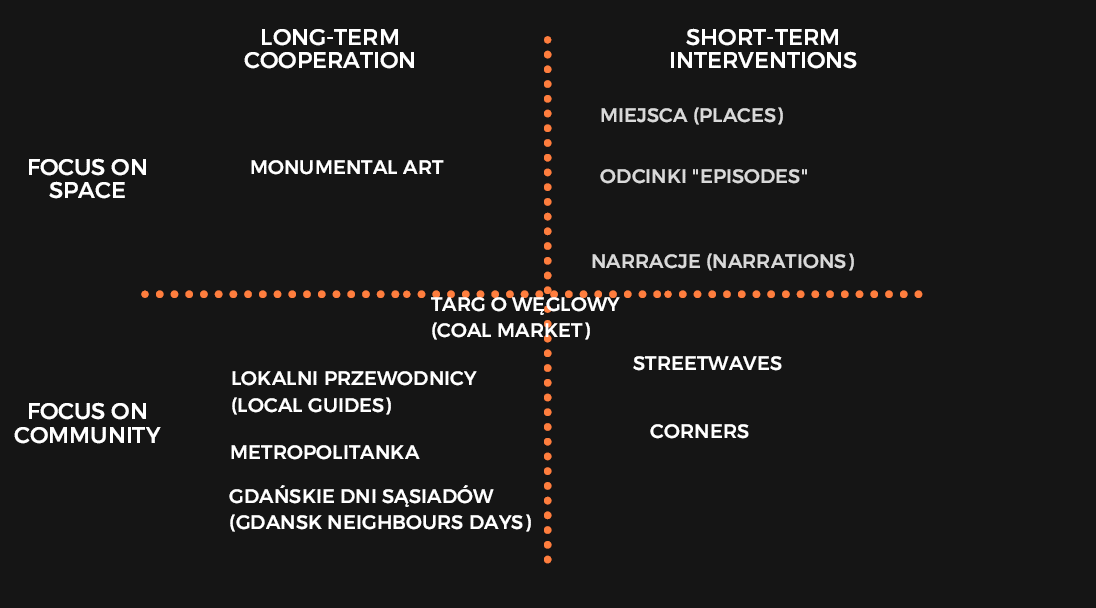 Transforming the “Grey” Reputation of Gdansk

Overall, Szymanska’s and Brylowska focused on the community space and strengthening local bonds between people and places. They wanted to create new and reviving public spaces and communities around them, and to strenghten an identity for each place or neighborhood. They aimed at rediscovering districts with unattractive or dull image by showing the potential and uniqueness of those districts.

Also, social engagement and activating individual and collective energy was important, sometimes by encouraging people to be artistic. In some cases, they wanted to provide an alternative tourism perspective and discover shared as well as private histories by using local tour guides. They wanted to stimulate off-season activity by creating a festival in November to get people out off their couches. 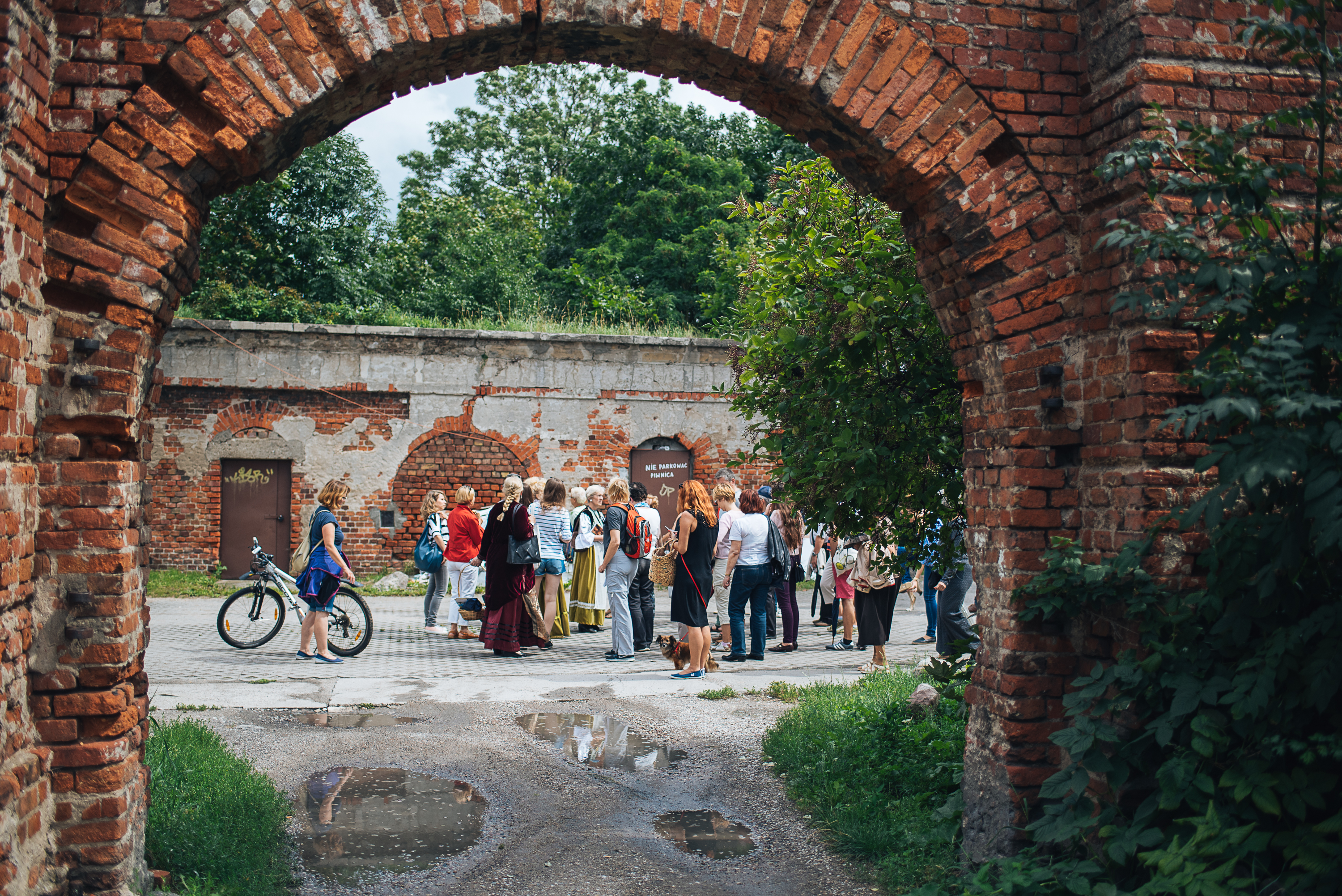 The cases took place in Gdansk, Poland and were focused on creating vibrant community spaces. The cases were very site-specific. Most of the cases transformed the physical city space into new temporary uses, sometimes including the creation of art in the space. In the Monumental art case, focus was more on the space, whereas in other cases, focus was more on the community.

Some of the cases were located in neighborhoods described as being “grey” or having an unattractive reputation. They wanted to make these areas vibrant and to create a new, unique identity and show the potential of the areas. One solution to achieve this was the project of Monumental art- making murals. Coal Market was made into an empty square in the historical city centre to make the area more vibrant. The area was in need of a revival for place and community.

Local tour guides were developed because locals weren’t very attached to the history of Gdansk as many of the residents don’t have extensive family roots in the city. Local tours familiarized local residents with the city’s history and uncovered individual stories of the people related to certain spots in the city. The tours were mainly intended for locals.

The Challenges of the Engaging-process

There is no common process for how these case examples were created. Some of the cases were started by City Culture Institute team own ideas and interests, some of the cases are answering a concern or an impulse from outside. After having a preliminary plan, they applied for funding from the city. Nowadays they have a budget which they receive annually from the city. However, the fixed budget doesn’t fit with spontaneous needs and getting additional funds is difficult. So, one of the main obstacles is finances. With the lack of financial resources, there is also lack of employees and the amount of working time they have.

One of the challenges in the beginning of a project is how to gain trust from new places and locals. It is easier when they know someone in the district beforehand.

In the case of Coal Market, Szymanska and Brylowska made a report to the City of Gdansk describing their process and success to prove that the City should continue working with their case. However, the City was very slow to react and there was sometimes a lack of political will.

In most of the cases, locals weren’t significantly engaged in the making-of processes, but locals could then participate and enjoy the products of the process, through participation in events or spaces or attending local tours.

However, local artists were often involved in the development process and in the case of local tour guides, locals became the guides. In the case of Coal Market, locals were engaged in the research process.

Working with art, there are controversies and different views, especially with murals in Monumental art; some locals didn’t find the murals attractive or needed. Also, the responsibility of artists should be considered. At the Narrations festival, for example, artists may raise some difficult questions or problems about the place and then just leave and questions remain raised but unsolved.

One of the most difficult problems which came up in regard to the local guide tours, is the “zoo effect” or “slum tourism”: people come to see how others live in poor districts and those districts will be romanticized. Visitors don’t do anything to make those districts better. In some of the cases where Szymanska and Brylowska created a festival inside a neighborhood, some locals felt that participants were invading their space and didn’t perceived those events very pleasant. 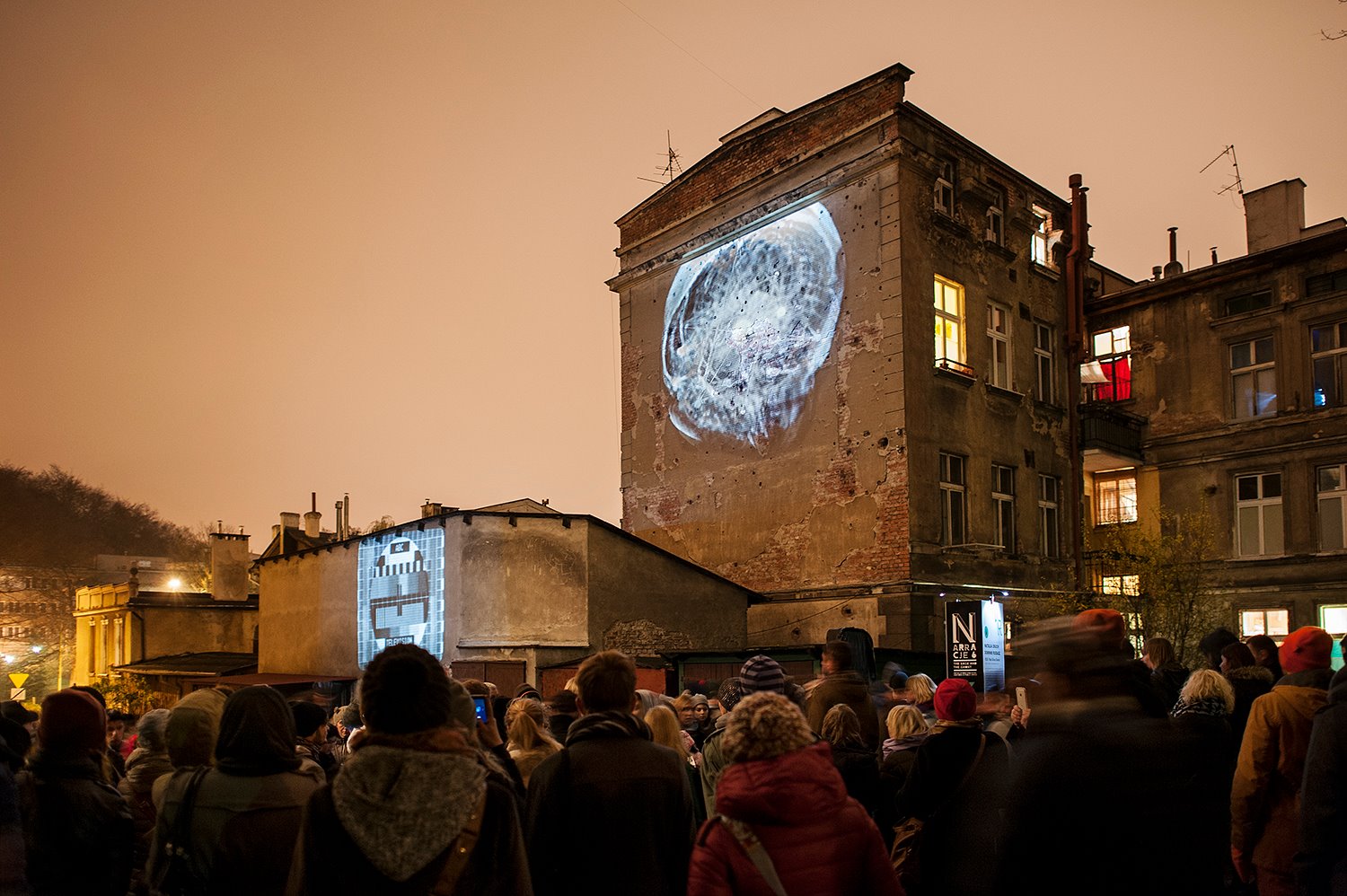 The development of the projects

Szymanska and Brylowska had long term co-operations as well as short term interventions. All of the methods included locals either in planning the cases or participating in the outcomes.

Long term cooperation included Monumental arts (murals): in Monumental arts, they wanted to revive a “grey” district and got an idea to start monumental painting and to invite local artists for co-operation. They hired a curator who had a role for engaging local artists to create the murals. They co-operated with the housing association that owns the blocks. The community was involved in the process of selection of murals and then acted as an audience for the collection. They had a festival day where artists were guiding tours for locals to tell them about their works.

The idea of involving locals to be the tour guides came after the mural project. Szymanska and Brylowska knew that locals had a good knowledge base and could be passionate about and empowered by being local guides. To achieve that, they gathered locals willing to be guides who were then trained in courses about local history led by professional guides and historians. Locals and tourists could then participate in the tours to get more knowledge about the history of their city and discover hidden and private histories. The model has been expanded to six different neighborhoods. Local guides are being payed a small compensation.

Other long term cooperation included the Metroplitanka project consisting of guided tours in an old shipyard and neighborhood days.

Short term interventions included Coal Market. Coal Market was an answer to the need of revival for an empty square in the centre of the city: the space was empty and unused. Szymanska read in the local newspaper debate arguing that the place should be given to the people. They decided to engage with the City, which had a problem with the area as they didn’t know what to do with the place. The City gave the task to Szymanska and Brylowska  to reconnect the square with the city. They created a marketplace that could be used by all residents in Gdansk. They asked local architectures to build a temporary space with multiple types of activities: they had green grass and seats for people to sit and hang out, spaces for different kinds of sports activities, cafes and food trucks, spaces for children to play, and open air movies.

They conducted a six month research on the process after the ten-day Coal Market event ended. They made an online and paper survey about how people use and see the place now and what they would like to do there in the future. They also did some observations in the site throughout the year and especially in May and June, when they did arrangements for organizing the event space. They also conducted some focus group workshops for different groups of residents of Gdansk. Afterwards, they did a report for the city to describe this process to get funding to arrange the events again the following year.

The Narrations visual art festival came from the idea of how to make cultural events off season, before and after summertime. How could they get people to leave their homes in November to discover the city? Szymanska and Brylowska didn’t want to choose any obvious destinations, so instead they chose a local neighborhood. They invited local NGOs, animators, and different artists along with the curator who originated the idea and theme of the whole festival. They also thought it was important that part of the art must be arranged through an open call for local artists.

The festival activities included art walks with curators for different age and language groups, as well as artistic interventions in public spaces. 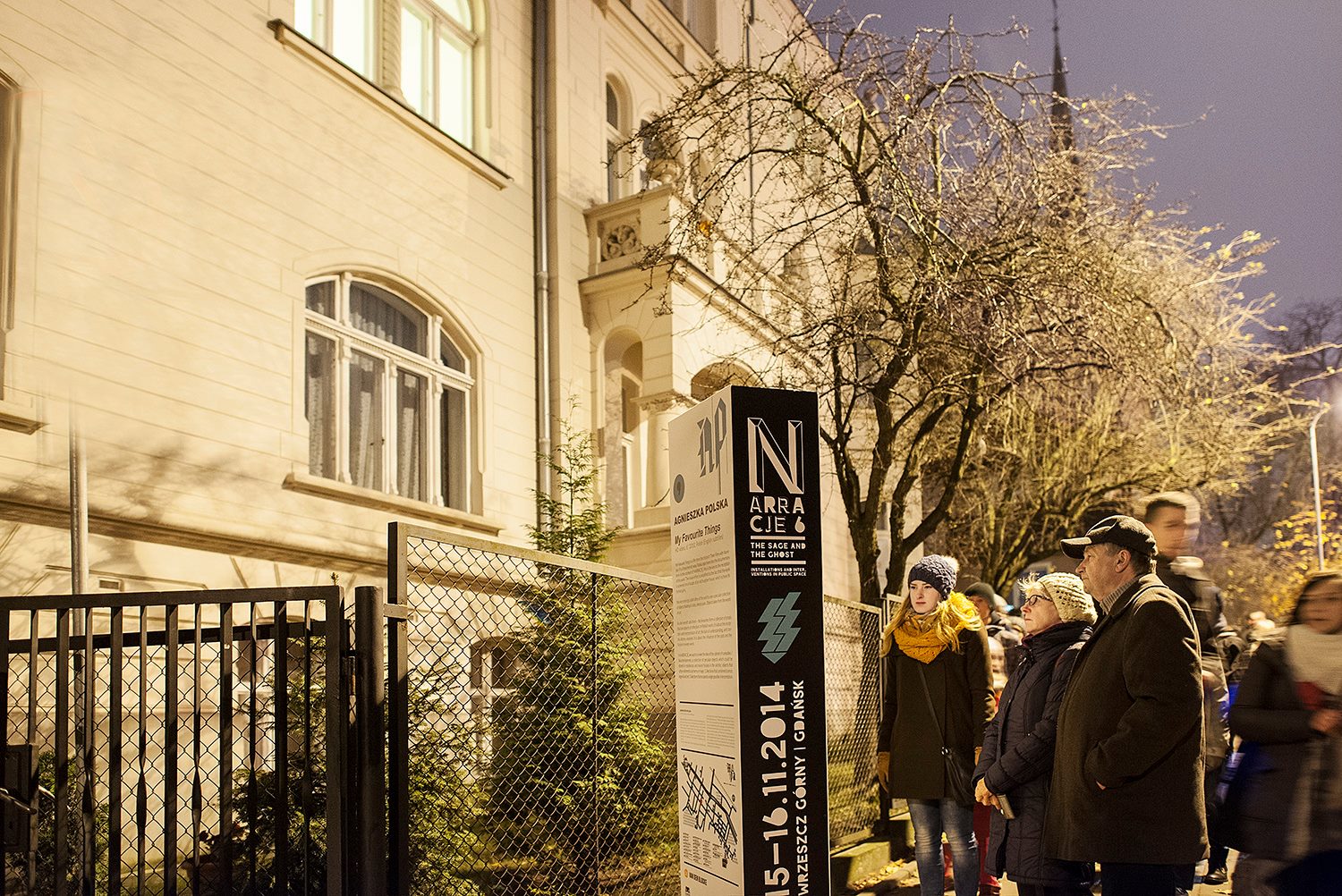 All of the cases had impacts on the local and citywide life: The Coal Market managed to attract many visitors but more important showed how simple changes may revive the place. Everyday use of a place by citizens was the indicator of success for Szymanska and Brylowska.

Also, with Monumental Art, many people found the project attractive and the murals became tourist attractions. They managed to create a new identity for the neighborhood: the neighborhood wasn’t very interesting previously, but with Monumental Art, people came to the area and wanted to know more about the area and the story of the district. Now local people can feel proud of their unique area.

Guided tours run during the summer and attract visitors on a daily basis. Tours help locals to build a common identity of the city, and tours increased the engagement of residents. Guided tours also changed the images of some of the districts into something more positive. Tours also inspire curiosity about Gdansk: locals can now get to know their city’s history better and feel attached to that place.

Festivals and neighborhood days rediscovered  the potential of the districts in which they were held. These events provided windows into the narratives of that place by having exhibitions of good quality art. The events succeeded in bringing people together and engaging more locals and evoking the potential of local leaders.

Most of the case examples are already finished as they had a fixed term. However, local guided tours are still happening during the summer and the Narrations festival is being held annually. These projects need annual funding from the City in order to be able to continue.