Lia Ghilardi is an urban sociologist, independent consultant and the director of Noema Culture and Place Mapping. She has studied sociology in Italy and has a MA in Cultural Management and MPhil in Planning and Urban Studies. Ghilardi is looking at cities from a social perspective and her professional interests focus on working with cities and urban development through the use of (broadly defined) cultural initiatives.

In her view, cultural planning is not principally about the planning of culture, it is more about adopting a fine-grained approach to local development which implies a deep understanding of local ‘cultural’ systems. Every place has its own culture, social and economic dynamic and distinctiveness, this is why Ghilardi has developed a method called local DNA mapping. It is basically about understanding the place and its distinctive elements. She has been using the method over 20 years. 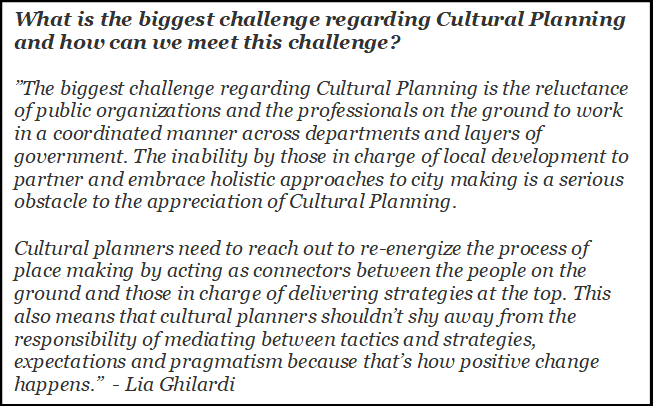 Local DNA mapping is a way of engaging with local communities and key stakeholders to propose ideas for making urban transformations more socially and economically sustainable. DNA mapping is also important in successful culture-led regeneration. She defines her method as:

A people-centred approach to local development and place making based on a deep understanding of the local culture, social and economic resources, community assets, urban DNA.

Mapping allows one to act on problems in a more ‘culturally ‘sensitive way and build on the distinctive assets of a particular city. The aim of this experimental way of approaching urban challenges is that, by using it, one can get a better knowledge and understanding of community needs, the way a place works, the unique resources, values, heritage, social interactions and aesthetics. It is a way of co-creating the city together with local knowledge. Mapping is also a way of experimenting with alternatives.

By understanding in a deep way how places work (and how they have been functioning in the past) it is possible to rediscover their `speciality’ (i.e. what they are good at doing) and help them to rethink, re-specialize and find and new identity. For Ghilardi mapping is ONE tool in the toolbox of place making and in particular:

It is about mobilising the distinctiveness of a place in order to create opportunities for people to work, play and grow as citizens and not just as consumers.

Local DNA mapping can be used for local level changes by municipalities, institutions and organizations. It is ideal for finding out what the challenges are, but It can also be used for finding gaps, needs, expectations, aspirations for change.

Mapping brings different aspects of local development together, it works across city departments and bridges the gap between separate areas of specialisation, disciplines and expertise. Collaborative mapping is a way of setting a vision and getting evidence to build up a strategy. When setting a vision for a place, it is crucial to make sure you are operating on a meta-level and set a clear focus what you want the city to become. Mapping is a tool for that.

Local DNA mapping starts by understanding your own speciality, your own DNA. What is special about your place? What skills and competences your community has? Once you ask the questions, you need to figure out how to get the answers. And the key to this is using mapping exercises. 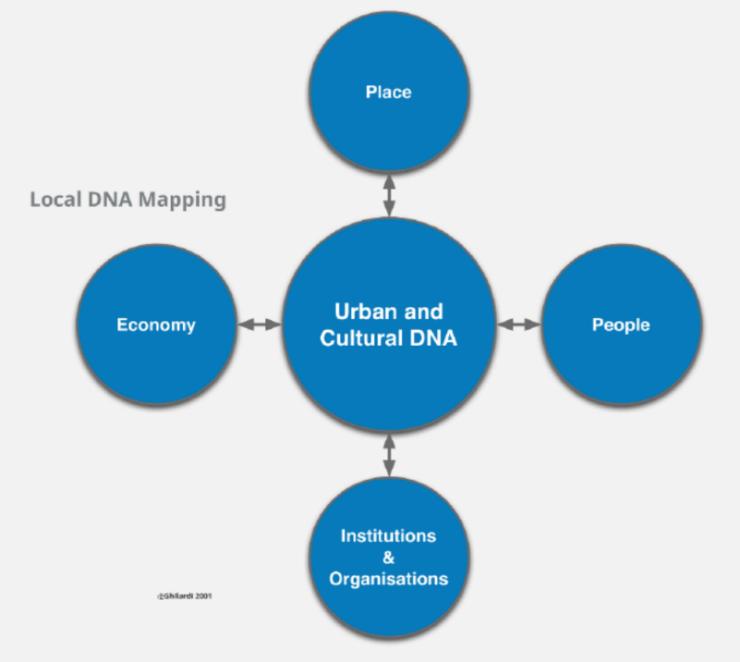 With the stakeholders, there need to be trust and confidence. Mapping needs to be coordinated for example by multi-departmental, multidiscipline working groups. It is however important to realize that mapping is an iterative process, the result of which can never be predicted. In fact, the results should be re-evaluated whenever needed.

The method itself consists of acting across four areas that combined make up the urban and cultural DNA of places. These are: place, people, economy and institutions/organisations.

When focusing on one of the four areas, there are a range of elements to be discovered during a mapping. For example, when studying people, there comes questions about sub-cultures, lifestyles, networks, memories and with place: landscape, topography, urban texture, spirit of place etc. All these can be the subject of a mapping exercise.

There are several tools that can be used in mapping exercises and (depending on the local challenge/context) Ghilardi employs some of the following:

It is also possible to use heatmaps, synergy charts, etc. As a part of community identity mapping one might physically be observing the city for example by standing near the local supermarket or at the station to observe how people interact or use the city. Desk research, or a study of the local media can be equally useful to get a picture of how a particular city thinks/feels. 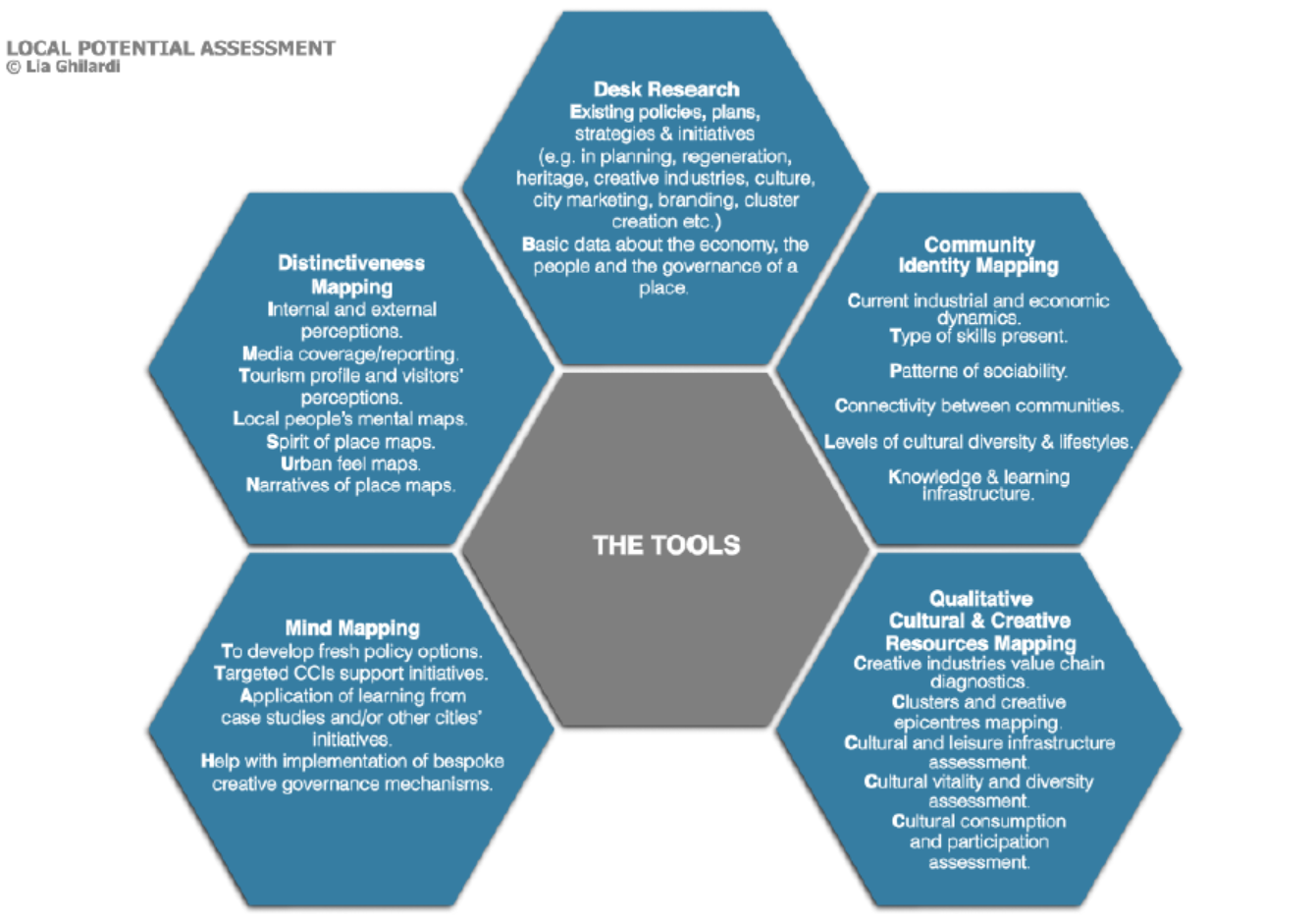 DNA mapping is a people-centred approach for local development. It is an approach which works at a local level, for small or bigger communities facing challenges, such as for example unemployment, poverty or general dissatisfaction. Mapping can bring together civic leaders, political representatives and local government stakeholders with community representatives, and together they can tackle issues and challenges.

Half of world´s population is living in cities, and cities are growing rapidly. There is also huge demographic changes in cities which can lead to different kind of problems, such as increasing of ageing population and inequality. Because of all the changes, new models need to be figured out to make cities competitive.

Mapping employs open source methods, thus it requires a new approach to risk management by governments and those in charge of collecting evidence on the ground. 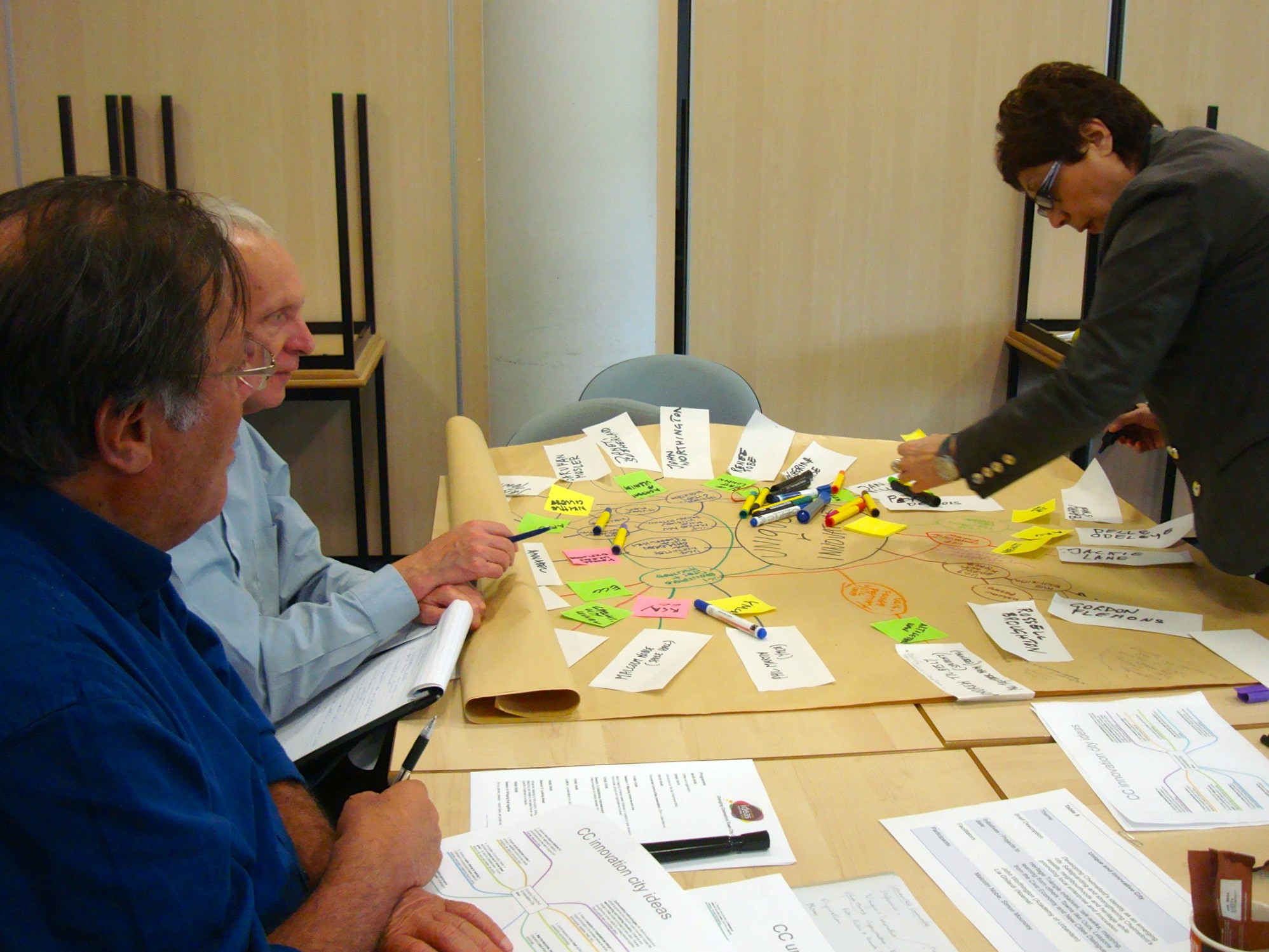 Case example from Sweden: A small industrial town was in danger of losing its (obsolete) industry thus putting at risk a significant number of jobs.  But local stakeholders kept refusing to acknowledge this danger. By mapping it was found that there were a group of approximately a thousand gaming designers and web designers in the area. However, the local civic leaders chose instead to focus on trying to keep the industry there and refused to see the potential of the other culturally and economically significant group. This is an example of how some cities can underestimate the potential of their citizens, even when they are presented with concrete evidence. In general, however, the method is designed to raise awareness of how by mobilizing local cultural resources (broadly defined) you can have an impact on the local economy and tourism among other.

Mapping is the right tool for open and constantly changing ecosystems, like cities.

It is a way of co-creating the city.

A tool to bring the stakeholders in on the process. Successful visions are based on evidence and collaborative mapping. As a method, mapping is a way to figure out what we can do in our own cities, to act locally and a way to provoke a conversation among the local community about how a place should change. By using local DNA mapping, it is possible to identify what is special and unique in our own city and how does the system of relations between different aspects of local development functions. Generally, mapping provides new knowledge to the stakeholders and a way to deliver the vision in a coordinated manner.