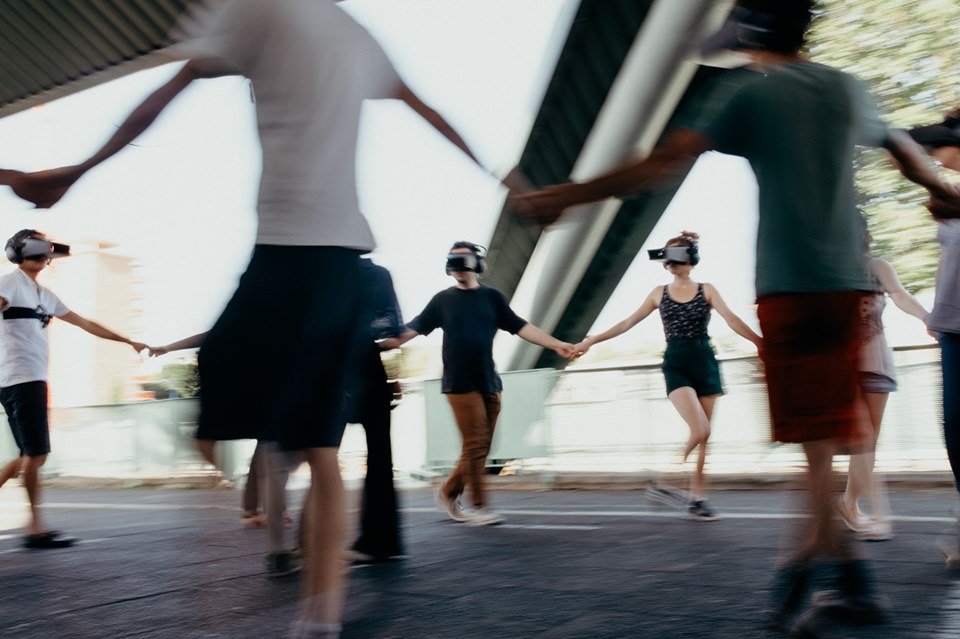 FRAMING THE CIRCLE by Benjamin Vandewalle – part of Studio Cité

Zoom in on the world in a choreographed circle walk

FRAMING THE CIRCLE is a choreographed walk that transforms the world into a road movie. Holding each other’s hands, you move in circles around the square. A black mask allows you to see only a small part of the surroundings – and of the dancers who appear among you.

As in a movie where the director has decided which part of the world you should see, the mask does the same. You zoom in on fragments of the dancers’ bodies and movements, details in the square, glimpses of the other participants. Everything is experienced magnified and intensified in an experimental form of tight-wire dance.

FRAMING THE CIRCLE gives you the feeling of experiencing your surroundings for the first time. Your attention is sharpened and you see everything, hear everything, smell everything. With the same concentration as you see a work of art, a performance or a movie, you dive into another world – a place somewhere between reality and fiction, where you lose your individual perspective and devote yourself to being part of something common and organic.

Together with the others, you are simultaneously observing and creating a number of scenarios. Occasionally, reality looks back and asks the question: Who is looking at who?

“No matter how much we believe our own experience of reality is reality, it is important to learn from time to time to get lost in a different perspective.” Benjamin Vandewalle

FRAMING THE CIRCLE is part of Studio Cité – a cross-over between a travelling funfair and a personal mirror cabinet with inventive constructions created to explore the city. Read more here.

Benjamin Vandewalle is a Belgian choreographer and dancer from the renowned dance school P.A.R.T.S. In 2012 he moved out of the theatre and made city space his experimental room.Here it is not dancers he choreographs, but the city, its residents and its everyday life.

Or, it is actually our gaze that he choreographs when he separates our vision from our body with his constructions. He blurs the distinction between spectator and performer and between reality and fiction, and he makes us question our senses.

When we change the way we see the world, we also change our thoughts and ultimately our actions, so Benjamin claims. Thus, through his works, he gives us new ways of interacting with the world and makes us think about how we perceive our surroundings.