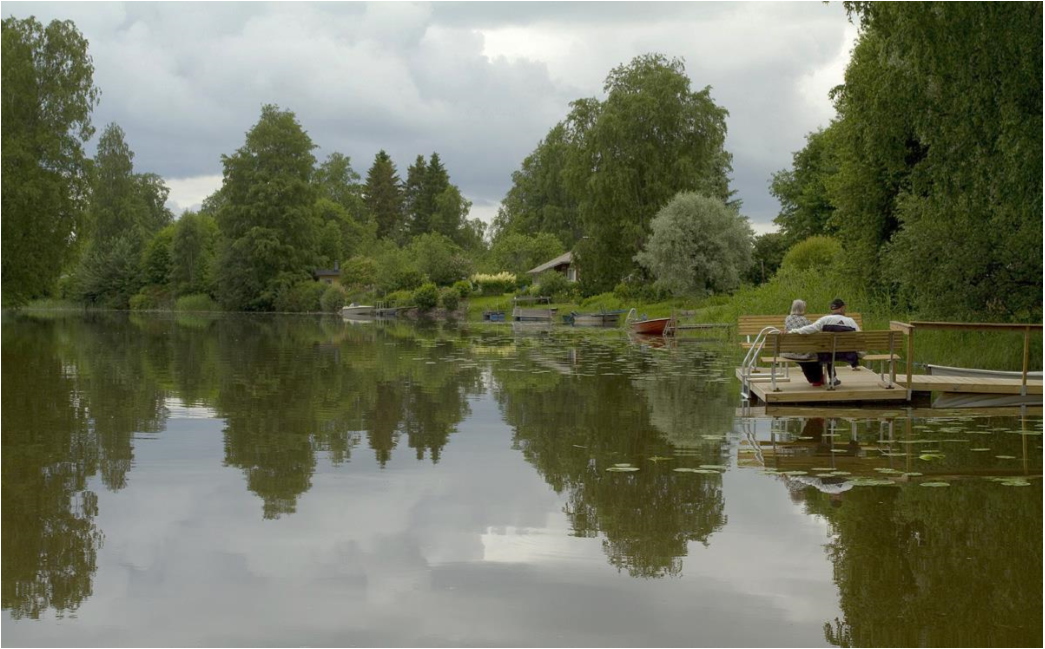 Cultural Mapping and Planning in Pori

The presentation at Nordic Urban Lab included Jaana Simula, Head of Cultural Unit from the City of Pori; Maunu Häyrynen who is a professor of landscape studies at the University of Turku; researcher Vuokko Kemppi-Vienola from the university of Turku as well as artist Marjo Heino.

Simula introduced the strategy and background of Pori and the work they do in the Cultural unit. Her presentation was followed by Häyrynen who presented cultural planning cases in Finland and the cultural planning work they have made in Pori suburbs. City of Pori’s aims include exploring the full potential of their green and blue areas, such as Kokemäki river area and green areas located inside the city centre. They also want to establish a strategy of public art. 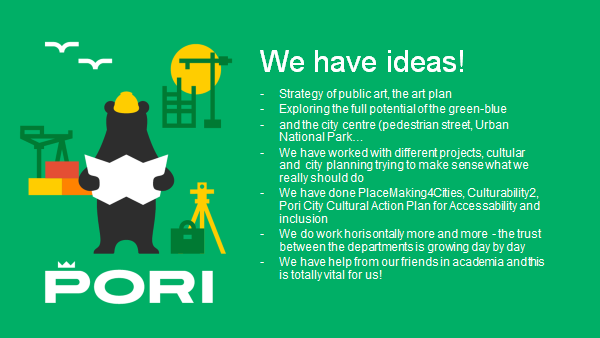 Slide by Jaana Simula, presenting the work in the Cultural unit in the City of Pori.

Kemppi-Vienola and Heino, forming a team named Kokkeli, presented their ongoing cultural mapping work in Kokemäenjoki river delta area and how art can act as bringing together local communities. Kokkeli are funded by Kone foundation and are in co-operation with the City of Pori, students of University of Turku, local artists, groups, residents, and a local resident association.

Kokemäenjoki river delta area has precious natural values: it’s the widest river delta in the Nordic countries and it’s often characterized as a biological hotspot. Major sections of the estuary are included in international nature conservation programmes. Moreover, the case area has nationally important built heritage values: old Huvilajuopa summer villa area and Hevosluoto allotment garden from 1946. Currently, some of the old villas are being demolished for replacing them with modern villas. This creates controversies on the area: demolishing old villas might endanger the number of these cultural heritage buildings. 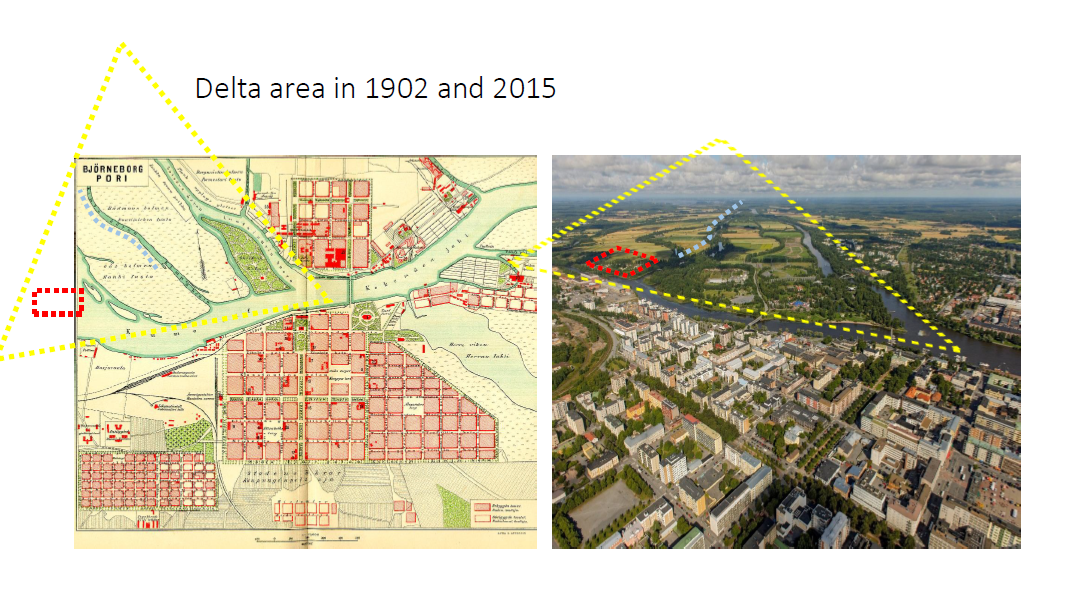 The aim of Kokemäenjoki river delta area project, is to build the sense of community for an area that currently lacks dialog. Developers believe that art could work as a tool for bringing people together. There is also a concern of preservation of the historical architecture and nature in the area. Moreover, their aim is to produce information for the city officials of what the residents in that area want.

For the Kokemäenjoki river delta case, Kemppi-Vienola and Heino came up with a plan and did a grant application for Kone foundation. After receiving funding, they contacted local resident association and communities to start a co-operation with them. They did few walks with local artists to receive information of the area. Students of the University of Turku conducted interviews of locals and held workshops as well.

Their work for the site has only been running for 3 months now, since the beginning of 2018. For the next summer, they are planning to organize a landscape route map exhibition to present results of the mapping done in the workshops, color workshop for babies, painting workshop for locals to get to know to each other, and making videos for locals to bring the river area more into their consciousness.

One of the challenges in the process currently is that the residents of summer villas are not in the area during wintertime. It’s not very easy to reach them before summer nor to start building the community or organize events before summer. Kokkeli is also planning to have projects around the whole river, not just in the 2 km long area. It’s a big endeavor to try to find local communities and work in the whole area in 2 years. The project has received funding for two years, until the end of 2019. They hope that the City will take over from there with an art plan/strategy.

Kokkeli used multiple methods for getting local knowledge and experiences. They opened a collaboration with local resident associations to open a dialogue. They also did walks with local tourists around the site to get bottom-up information from the site.

Furthermore they made web map surveys in collaboration with residential associations for collecting views and values of the locals. Almost half of the residents answered which was a good result. In the second round of the web survey, the link for the survey was shared with enthusiasm for other user groups as well.

See Powerpoint prensented by Vuokko Kemppi-Vienola and Marjo Heino; From Mapping to Art

Students from University of Turku held workshops to obtain data from local residents and people owning summer villas in the case area. The workshop had three topics: one of them was mapping of locations of important places for locals and places of dislike. Mapping is a method that gives valuable information: Kokkeli for example found out that people used to celebrate midsummer at the site but for some reason it had ended. Kokkeli is planning to restart this midsummer celebration.

They also collected pictures from social media (Facebook, Instagram) to get an idea how residents perceive the area and what they value as important.

The Future of the River Delta

For the next summer, Kokkeli is planning to create a Landscape route map exhibition to present results of the mapping made earlier the same year. They will also continue with workshops in the summer, with the summer residents. Their aim is that residents would get know to each other through painting workshops. Kokkeli uses art as a tool to gather the residents and to provide new perspectives.

Even though Kokemäenjoki river delta case just started three months ago, they already have the first results of their research; Residents want to remember the forgotten history of the area again. They find that the natural green corridor in the area is important and unused for possibilities of wellbeing, such as jogging routes, which could be built without weakening the privacy of the residents.

All in all, residents were very enthusiastic to make a change and develop their area.

The case is still in process and it will continue for two years. Next summer Kokkeli is planning to have activities to engage the community for activities and dialogue together. 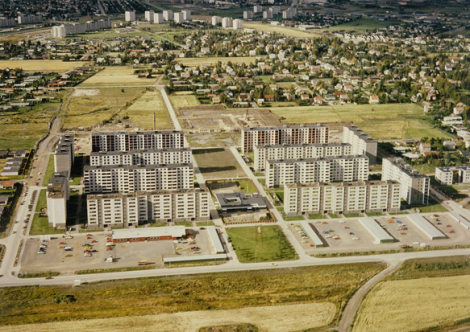 In the case of Sampola suburb, the aim was to conduct cultural mapping in the area and create cultural activities in the Eastern suburbs as well. There was no prior research or development projects in those suburbs. Sampola suburb case included a strong co-operation between the City of Pori and research groups of University of Turku. They also had co-operation with local residents and T.E.H.D.A.S. artist collective as one of the local NGOs.

Sampola is the main suburb in Eastern Pori with around 10.000 inhabitants and 46% retired people. The area used to have industry and it was one of the areas that didn’t recover well from the recession in the 1990’s. Now the area attracts mainly elder people because of its cheap housing with lifts. Young families move out of Sampola to nearby detached houses when they have the possibility. The area can be characterized as being a passive area, that doesn’t attract lots of interest. It has little spontaneous cultural activities and weak participation rates in planning.

In the case of Sampola, researchers received a research grant from a suburban research programme for 2013-2015. They used multiple methods for cultural planning.

However, the mapping emphasis of the researchers wasn’t connected with the City of Pori’s strategy making. The sectoral approach of city planning and the expectations of the City didn’t fit with researchers’ cultural planning agenda. There was also a lack of strategic connection on behalf of the residents: residents participating in the research came up with reporting their needs to the researchers, which then weren’t dealt with by the city.

One issue researchers noticed, while working with the community was, that you should have immediate and visible results, otherwise the community would have the feeling that developments weren’t realized.

Furthermore there was a lack of continuity after the project and no one followed up on the project. Researchers are still waiting for a wide cultural planning strategy by the city. 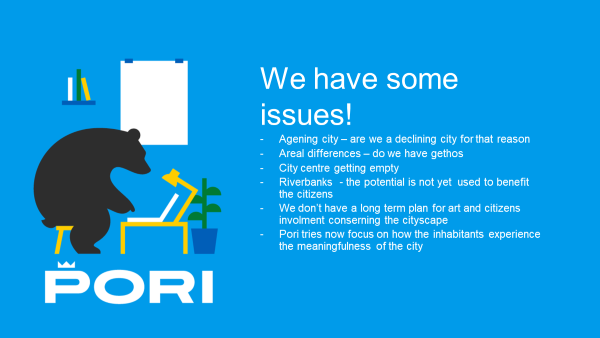 In the Sampola suburb case, researchers used a multidisciplinary range of methods: quantitative, qualitative, interactive and participatory methods. They used mapping for producing knowledge and participatory GIS queries. Even though Sampola has 10.000 inhabitants, only a few hundred people took part of the project, which can be seen as the challenge of the residents in the area.

Results of Sampola case study of cultural mapping show that at a community level, there is a strong, homogenous working class character of the residents, although most of the residents are not working anymore.

They also found the dominance of ageing population and tensions between different age groups: families with children are moving out from the suburb. Especially ageing people found everyday culture (social networks, local activities, library) important whereas institutional culture such as public art was not that important.

Sampola suburb was seen as having a bad public image, but they also found the rise of suburban nostalgy. They were valuing green areas and closeness to nature.

They found out that local shopping centres were important places for contacts and activities, but they were also seen as “landscapes of fear”; places which were avoided. However, in general, local residents felt safe and comfort.

The study was successful coping with the “messiness” of local culture. Sampola case has already finished and there are no plans for continuing the project.