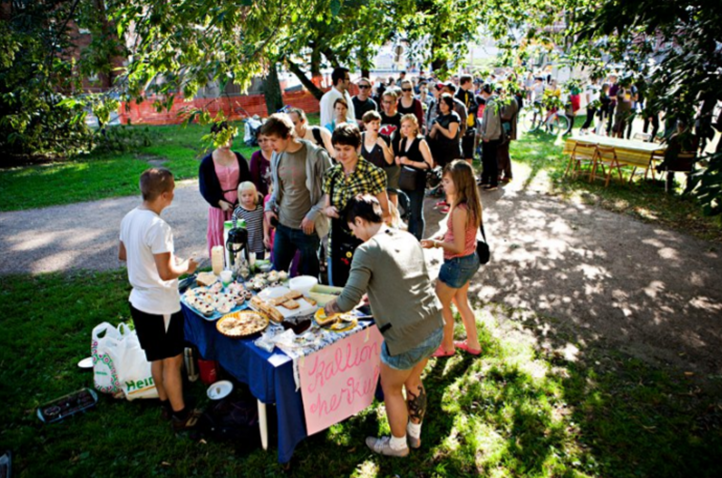 Civic Activism as Resources for The Metropolis

Pasi Mäenpää is adjunct professor at the University of Helsinki. Maija Faehnle nowadays works as senior researcher at the Finnish Environment Institute SYKE and University of Tampere. They have done a major mapping of different models and trends of participation formats in the Helsinki region which gives us a unique insight into visioning alternative futures for the metropolis, underpinning Helsinki’s commitment to engaging citizens.

The Civic Activism as Ressources for the Metropolis was a research and development project organized by the University of Helsinki. The objective of the project was to study civic activism from various perspectives, e.g. innovation policy, sense of community, ecological sustainability and involvement. The goals are to identify how civic activities support the themes mentioned earlier and how government could support the activism. The research project was done in 2015-2017. The presentation which was kept in Nordic Urban Lab 2018 summarized the research project and its results. 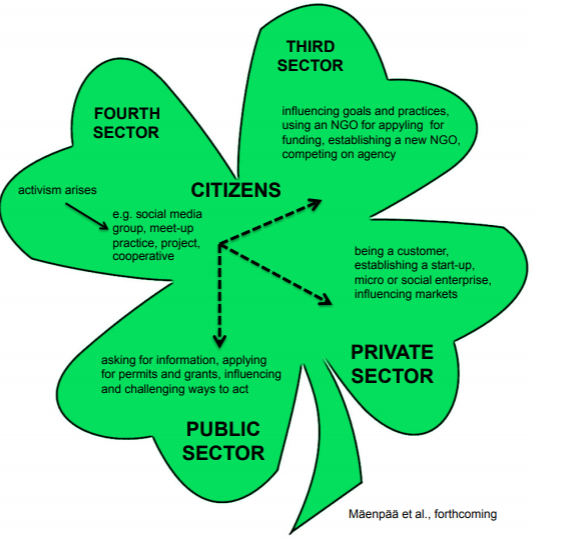 Urban civic activism is defined as proactive and constructive co-action, which is usually self-organized outside of NGOs.  Often the activism is do-it-yourself -activism, not orienting towards decision making system or political engagement.

The active network in social media or in internet works as a platform which brings together the active citizens. The actions are people-driven, from bottom-up. They can be e.g. small improvements to physical landscape or relate to cities and urban life.

During recent years there has been a need to rethink the participatory process and civic engaging.  The ways to think about citizens’ roles and potentials in urban development must be updated by the city officials.

New phenomena like sharing economy and digitalization have brought wider range of opportunities to civic activism. Social media is an important platform for civic activism, and it works as an actor-network.

Traditionally we can talk about three sectors, public, private and the third sector which can be e.g. a NGO. Faehnle and Mäenpää talk about the fourth sector which is a new form of activism. It can be a small group of people, project or a social media group which has an agenda or an idea they want to do.

The Fourth Sector in Action

The civic activism has been on rise in Finland. New actors on field and new forms of activism are occurring. The presentation at Nordic Urban Lab included numerous examples of civic activism, for example ‘The Restaurant Day’, ‘Sompasauna’, ‘Making Helsinki more urban’ – Facebook group, ‘Urban Helsinki planning group’, neighbourhood movements and many others. 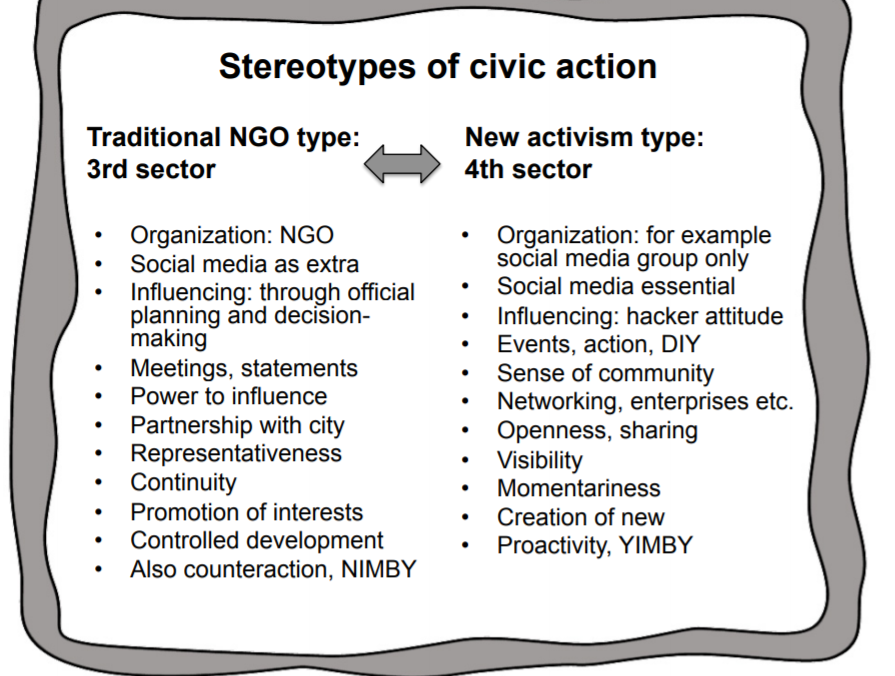 Some of the cases of civic activism have even affected the public sector and the decision makers as ‘Restaurant day’ (see photo above), which is based on the idea, that everyone can open a pop-up restaurant for a day, on a street or at home or where ever. The event was originally organized  few times a year and it became super popular.

It started from Helsinki and spread all around Finland, and later to other countries. According to Finnish regulations, the food seller should have had a license to sell food.

But because of popularity of the event, the regulations were modified so you can set up a pop-up restaurant for certain amount of time.

Later on, the City of Helsinki has taken the Restaurant Day as a marketing brand for the city. The idea started within a small group of people and it has become well known event in many countries, and it’s still ongoing.

Same kind of phenomenon can be identified with the public guerilla sauna, ‘Sompasauna’. It was build by local citizens, without permission to land owned by Helsinki. The building regulations weren’t followed, and it was technically “illegal”. 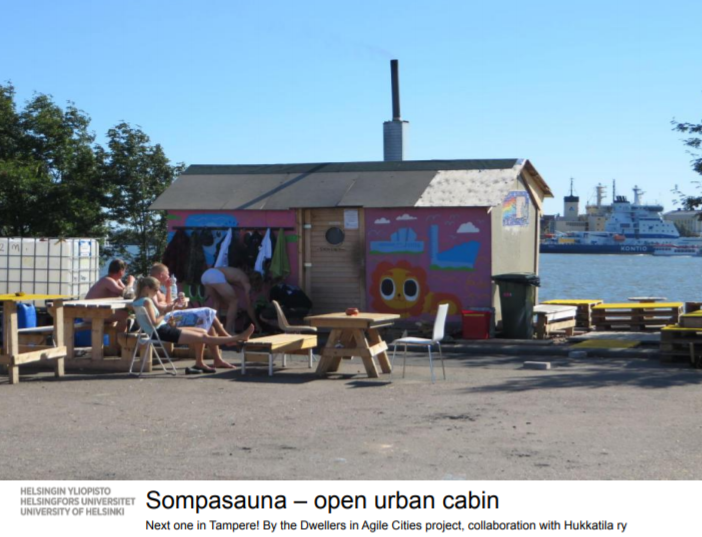 The area became quickly known by locals and it has been a cultural hot spot for many years now. Helsinki let the sauna stay and you can even see the pictures of the sauna in commercials at the Airport of Helsinki-Vantaa. It also became a valuable marketing brand of urban life to the City of Helsinki.

Other interesting examples were the social media groups, which have become popular platforms for discussions between professionals, semiprofessionals and citizens.

The ‘Making Helsinki More Urban’-group is a good example of a group, which was founded by citizens and became a channel, where officials and citizens can discuss urban planning related topics. It has become a valuable source of information also to the officials.

A New Kind of Activism 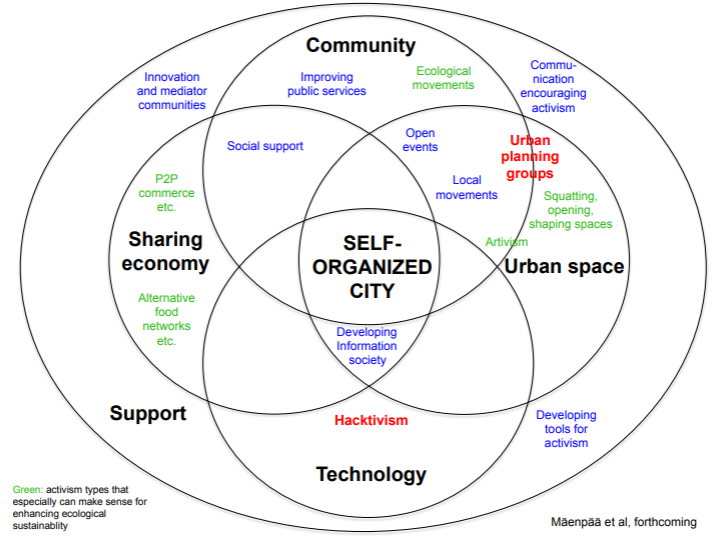 In general, the civic activism in Finland is changing. Because of the new forms of activism, it can be characterized with five dimensions. One of them is sharing/civic/platform economy. New forms of economy are e.g. P2P services, food networks, peer renting and time banking. The second one is activism focused on community, which can be local movements, events, social support or improving public services. The third one is shaping urban space, e.g. urban planning groups, squatting, opening new spaces and shaping them.

The fourth one is activism developing the use of technology. This is a phenomenon which occurs because of the digitalization. It can be hactivism (civic apps, improving datasets etc.) or developing information society, like opening new digital resources. The fifth form of activism is supporting other activisms, like creating innovation communities and developing new tools. 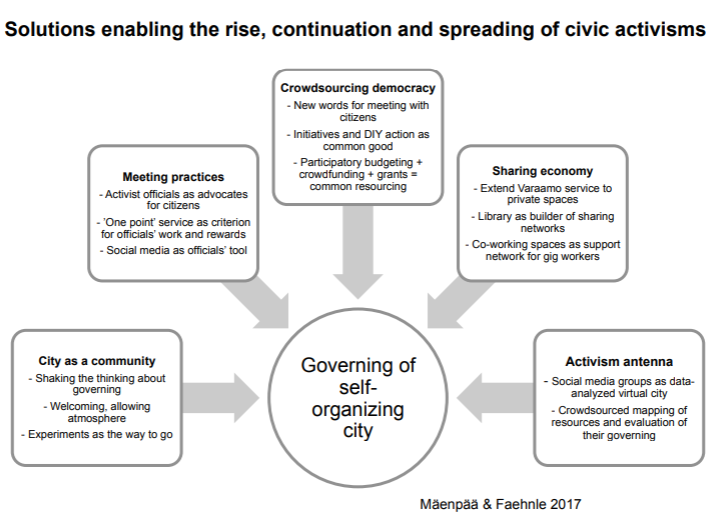 The relationship between the government and the citizens is also changing. The citizens take bigger role in the field and tasks which are traditionally were done by the government. The markets and the economy are “taking steps back” to sharing and changing services. P2P services like co-owning and alternative currencies (like time) have become more popular during the last years.

The power relations inside the society are also changing. The government can be playing a role as a partner, facilitator or step out and stay away from the projects.

The city of Helsinki has launched its new participation model, in which the citizens and the NGOs play a significant role. The model also includes “city coaches” who will work as middle-men between the public sector and the third and fourth sector. The new model even includes a binding obligation for the city officials to support the active role of citizens and NGOs. This is an interesting example of how bottom-up civic activism has become an important phenomenon, also raising the question if  the city wants to integrate it to the system. 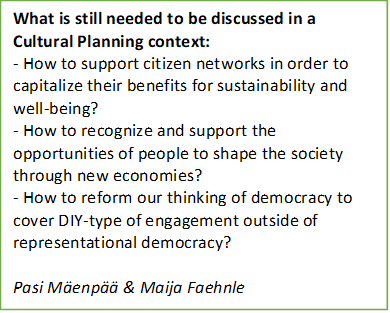