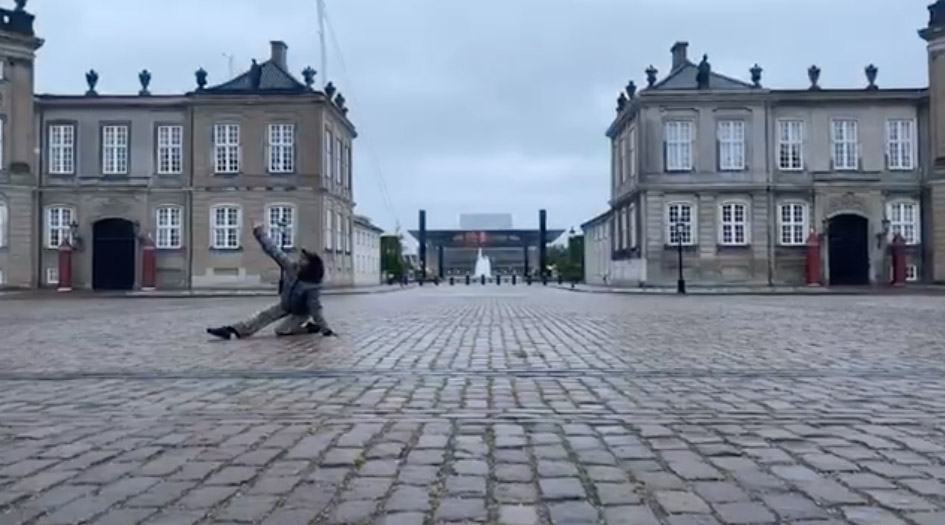 Wa(l)king Copenhagen 11-20 May – reflections and videos

Non-places, normality, concepts of the other, urban disconnections, spaces between. The second series of walks developed many of the themes introduced in the first series. But the artists also insisted that beauty is still there, somewhere, but perhaps not where one might expect it.

(Im)perfect places
The opening walk with architect Johnny Svendborg had the simplicity and beauty of haiku sketching poetry. It captured the fragility of architecture as a frame for the state of MA (Japanese word for the negative or interval space), when humanus locus is embedded in each of us and we “sense place”, in this case 12 small walks in and around Christianshavn.

But Johnny was the exception. Silas Inoue’s walk was a symbolic return to the suburban, revisiting youth training clubs counterbalanced with actions “nowhere”, surreally skipping on top of a motorway junction, leaving his art works hanging on the wall of a disputed, disused building plot in Amager and suspended an ignited sculptural work in Herlev at a disused petrol station.

The iconic video of the series must – in the context of corona virus – be Meleat Fredriksson dancing on Amalienborg Square, framed by stately greyness, a threatening grey sky and all in grey. Absolute solitude filmed by the only other person in the square: a passerby. As the guards politely explained; “one is allowed to film only with hand-held camera and not a tripod”: Thank you whoever! Perfect audience participation for an astounding piece of choreographic documentation of this time. And social distancing ad infinitum.

Pantomime and provocation
Several artists chose to address isolation and indifference full on with some extraordinary situational pieces. Marcela Lucatelli captured her own playfulness pushing her plastic baby and pram through Copenhagen “ghettoes” with operatic theatricality and some amazing vocal improvisations, which she selfied in series of unnerving hand-held shots.

Dancer Meleat Fredriksson put herself into a spectacular blue dress and played out a series of tightly dansant interventions in every-day Nørrebro. Using the language and the staging of the catwalk, Anja Franke challenged the dreary asphalted motorised catwalks of the ring roads, whilst she shed 12 recycled garments as a comment on the throw-away culture and a parody of suburban mentality.

Body Rituals
Yes, the body was also put against the city and exposed its own interpretations of the situation. We followed Boaz Barkan in bare feet down the stairs and to 12 closed theatres, where he danced twelve rituals lamenting, mocking and questing these closed cultural spaces. An incredible “dancing girl” happened to be at the right place at the right time (see it below).

Mikkel Hobitz Filtenborg’s calm and unbelievably focused acts of head-balancing and hair-hanging were like rituals from some other place and some other time. He found perfect spots, which triggered the imagination in this marathon walk of Masaian dimensions towards North.

Many of the artists are leaving traces. Andreas Liebmann sprayed questions and quotes marking pavements, littered texts along nondescript Tårnby roads where the ordinary also triggered uncanny associations of place, scale and belonging, as with his “Glamsbjergvej Europa”.

Writer and ecologist Shekufe Tadayoni Heiberg took us by the hand and walked us through Vestegnen and introduced us to the sustainable future of transformed gardens, ponds and parks and we felt so relieved with her ensuring words of hope. The simplicity and beauty of these mini introductions into permaculture was so refreshing. Yes, gardening has in fact always been an art form.