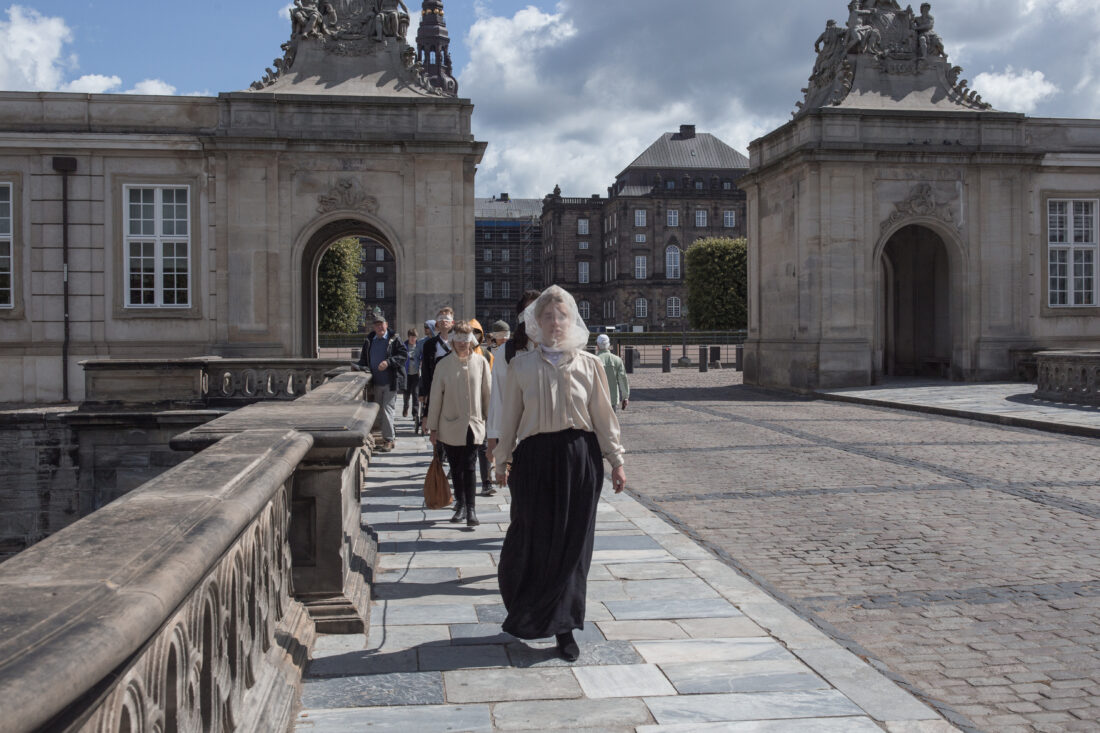 The performance group Sisters Hope invites you on a deep, sensuous journey exploring the poetic layers of the city.

As a participant, you will partake in a poetic walk and performance which will help us unfold the sensuous aspects of inhabiting the city. In contrast to the idea of ​​the large, noisy, alienating metropolis, Sisters Hope brings us in contact with the things close to us, the tactile and the aesthetic dimension of the capital.

For 24 hours, you will explore the city in small groups. The walks are guided and facilitated by Sisters Hope’s performers such as: The Image of The Hanged Man, The Invitation, Wo(man), etc. Before your departure, you will receive a letter with guidelines on what to prepare and bring on the walk. Along the way, there will be meals and the night will be spent at Nikolaj Kunsthal. Here you will delve into a deep sleep or gather in nocturnal rituals in the sacred halls of the former church, with room for both diverse and deep contemplation.

Ever since Sisters Hope embarked on their first poetic wandering two years ago, they have continually explored the sensuous layers of the city. Among other things, they have investigated the relationship between stone and bodies as urban building blocks, the layers of time within the capital, the metropolis from the perspective of a child, as well as statues of the cities as symbols of power.

During the walk, the participants will explore the city’s sensuous elements. Which narratives, atmospheres, movements, and emotions are stored between the stones of the metropolis? Participants will perform research, and the discoveries you make will be exhibited in display cases for further study by other visitors.

We are living through transitional times in which the state of the world has made us question what we thought we knew. With Sensuous City, you will take part in an active rethinking of future societies and the search for alternatives to the ways in which we live. Your discoveries will provide a foundation for new dreams and visions for the future of the city – a city within a Sensuous Society. 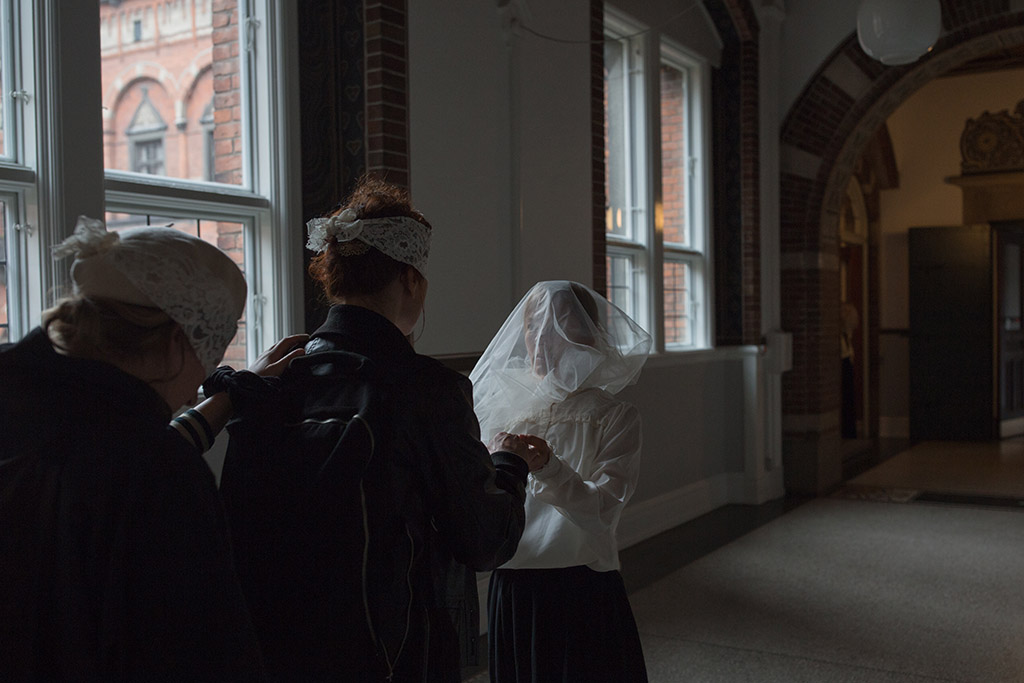 As part of the performance, we will initiate a big investigation of the city of the future. We will exhibit the findings of the research we perform during our poetic walks in display cases – material which will call into our attention the sensuous and poetic presence in the city or lack thereof.

This archive material will form a map of the city, drawing a new image of Copenhagen. Not an image in the sense of building and infrastructure, but an image of people, moods, and emotions. An image of a fleeting city, resting on poetry and dreams.

Gather inspiration from your own exploration of Copenhagen. Which hidden, forgotten or untouched potentials can be uncovered for the city of the future? 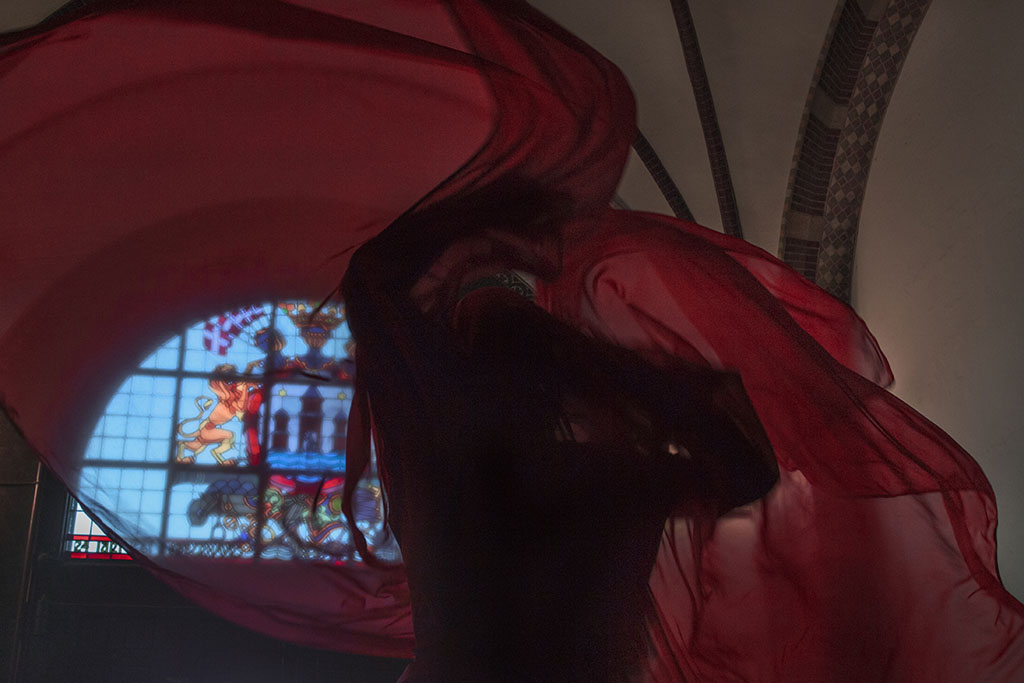 Sisters Hope is an award-winning performance group renounced for their strong performative concepts in which they evoke visions for the societies of the future, centring around the sensuous and poetic. For several years, Sisters Hope has investigated the subject of schools in future societies in the performative format ”Sisters Academy”. This included a 24hour installation in Den Frie Udstillingsbygning for a month during autumn 2021. Currently, Sisters Hope is focusing on more permanent embodiments of art, producing such works as the upcoming 5-year long performance piece ”Sisters Hope Home”, opening autumn 2021 in Hedehusene.

“The performance unfolds amongst the hustle and bustle of city life but is never engulfed by it. Again, two universes sail through each other without dissolving into one another. In hindsight, I picture, as from above, the groups of participants that slowly advance through the city as forming meandering corridors of perceptual intensity inside the everyday urban commotion, drilling into a secret fabric beneath the commercially driven, forward-looking, never present-minded running to and from contemporary city dwellers. The performance mines the city for a hidden resource, abundant yet scarcely harvested: non-instrumental sensuousness and presence.” I DO ART

Duration: 24 hours
Recommended for age 18 +
NB! The walk is in English 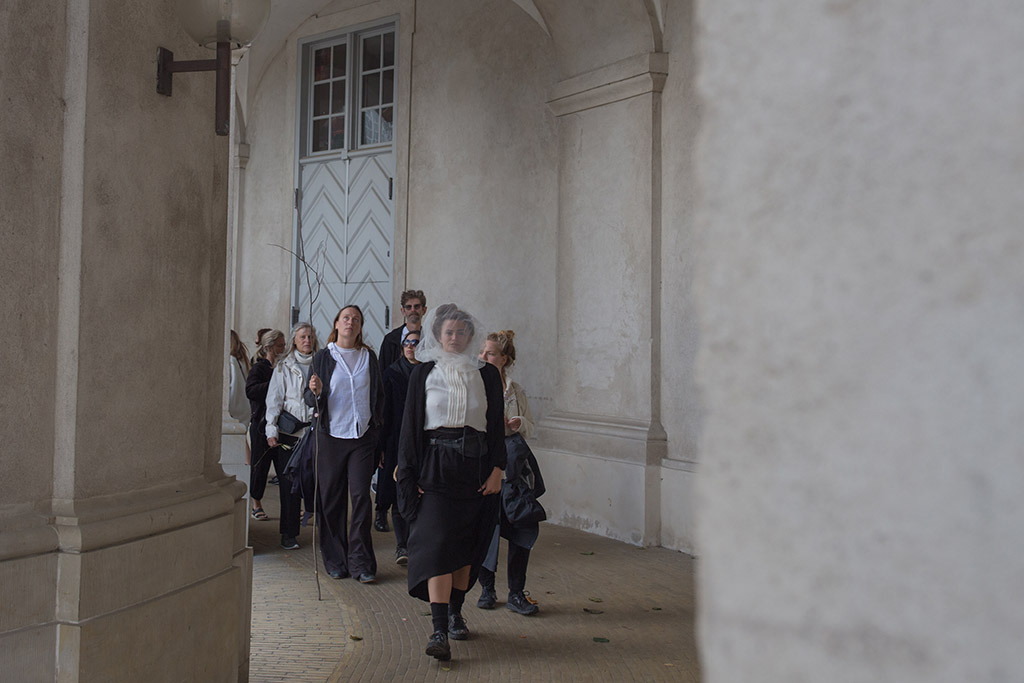 Sensuous City is created by Sisters Hope in collaboration with Metropolis and Nikolaj Kunsthal with support from the Danish Arts Foundation, Københavns Kommune and Indre By Lokaludvalg