A door slams. A baby cries. A dog barks. A couple is having a row. In blocks of flats we live side by side, yet we know each other best from these fragments of everyday sounds.

Like in a doll’s house, GRAND ENSEMBLE opens the façade of the homes in a block of flats in the north-west area of Copenhagen. A classical musician is placed on each balcony. 65 in total, the complete Copenhagen Phil symphony orchestra. In a 40-minute orchestral work composed especially for and with the flats, the musicians interpret and transform this cacophonic sound mosaic of everyday life.

Voices from the residents of Emaljehaven, fragments of a Bach fugue, melodic strings… Weeping children are harmonized into music. The dog’s barking sets the pace. Ringing telephones are mixed to a symphony. The composer Pierre Sauvageot converts it all to a grand, humouristic and playful musical dramatic work, which turns the flats inside out.

On the balconies we have all of the orchestra’s instruments. String, woodwind, percussion, brass, harp… but scattered all over the place. The melodies travel from balcony to balcony, rhythms are disrupted across stairwells, and the floors respond to each other with fragments of a theme.

As audience you are surrounded by the symphony in a five-story tall wall of sound. Bring your picnic blanket and the family and perch yourselves on the grass. The stage is set for an informal and highly unconventional concert experience.

Composer Pierre Sauvageot’s works in a musical universe with elements from improvisational music, sound art, electronical and classical music. He has since 2001 been the head of Lieux Publics, the national French centre for art in public space, based in Marseille. His most recent visit to Copenhagen was for Metropolis 2011 with HARMONIC FIELDS on Amager Strand. A giant installation comprising 500 wind instruments, which was visited by over 10,000 Copenhageners. GRAND ENSEMBLE is his latest work, which again intermingles classical music with the everyday life of the city. GRAND ENSEMBLE has been performed in Paris and Marseille in 2017, and the performance here in Copenhagen is the first outside France.
www.lieuxpublics.com 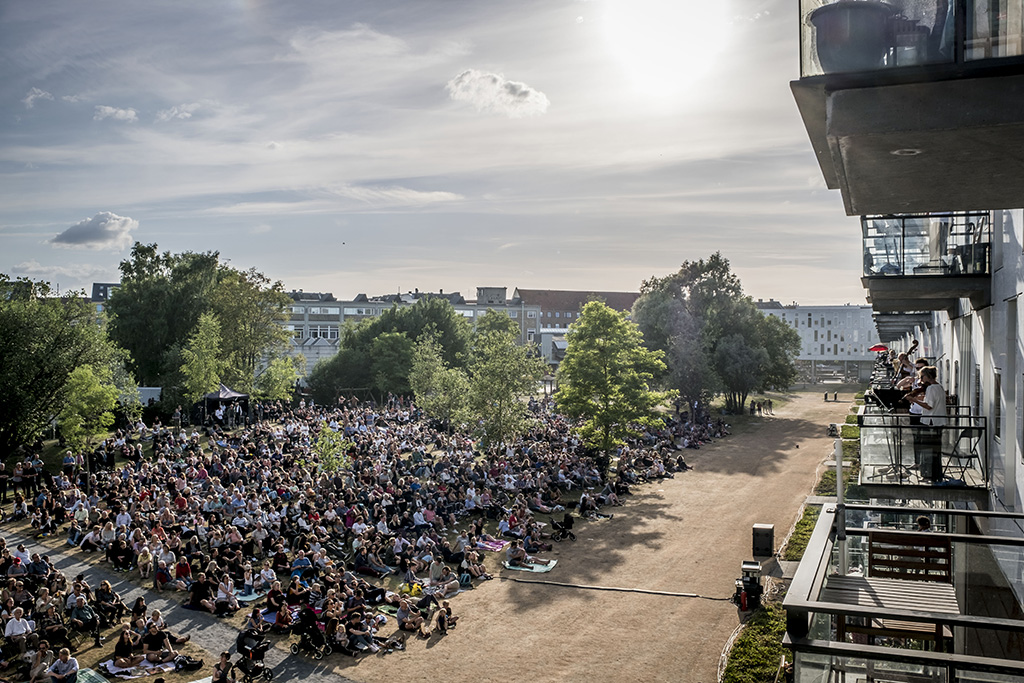 Copenhagen Phil is the symphony orchestra for all of Sjælland. In addition to their traditional orchestra activities, they make great efforts to bring the classical music to the people outside the concert hall with different kinds of concerts. A.o. with flash-mobs, virtual reality, concerts for children, co-operation with rhythmic musicians, and now, from the balconies of a block of flats.
www.copenhagenphil.dk 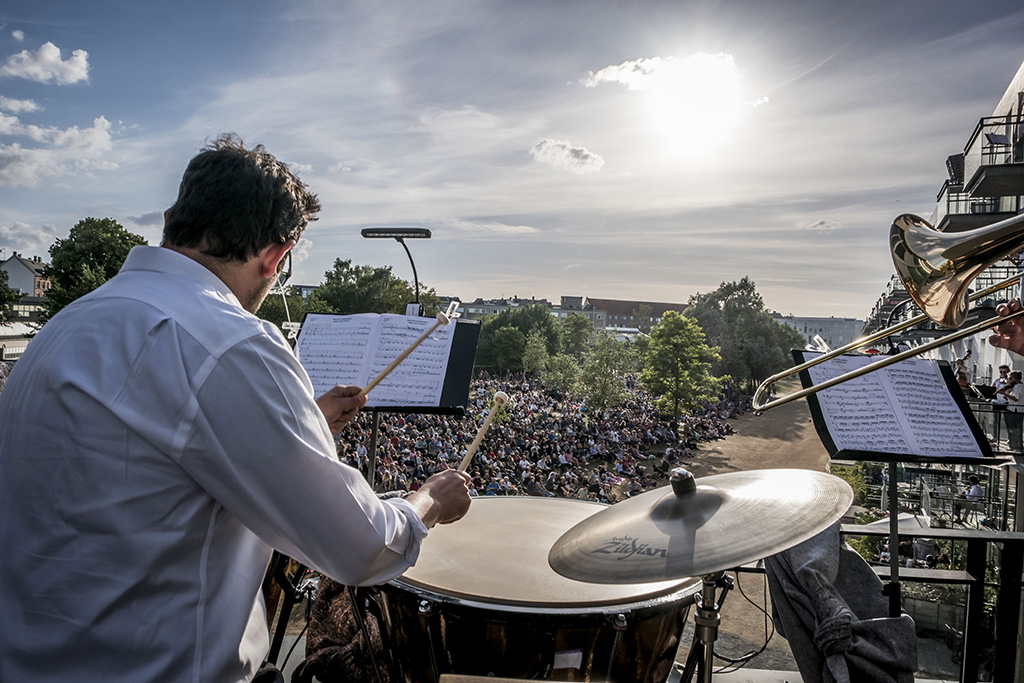 “‘Grand Ensemble’ is a genuine, well-written piece of composition music, where Pierre Sauvageot has worked just as much with the pre-recorded sounds of voices, door bells and dogs barking as with abstract tones. It was all used as musical themes and motifs, and towards the end a lot of the motifs gathered in a summative final that had been worthy of Sauvageot’s landsman César Franck or another of the 19th century’s great romantic composers. Adding sunshine, rosé and a responsive audience, the performance was an obvious success.”
Politiken

“Diving seagulls floated with the music, the uninhabited dogs barked from their speakers, a sacrosanct cradlesong from our cultural treasure sneaked in. The resilience of life sparkled with a subtle tango. And as a lamb cloud, a stroke of Bach’s Art der Fuge passed, while the sun painted the long west facade … The rush of the senses was in the North West of Copenhagen.” Weekendavisen 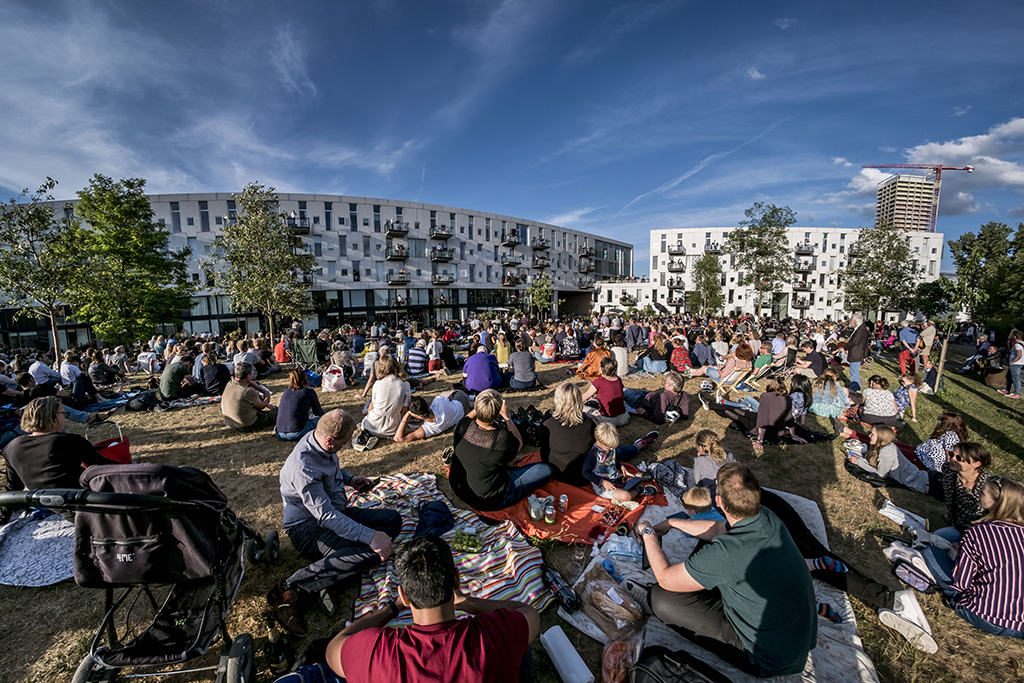 Duration: 40 min.
Recommended for: all ages

Supported by In Situ and Bispebjerg Lokaludvalg

This performance has received a production aid by the IN SITU ACT project, co-funded by the Creative Europe Programme of the European Union 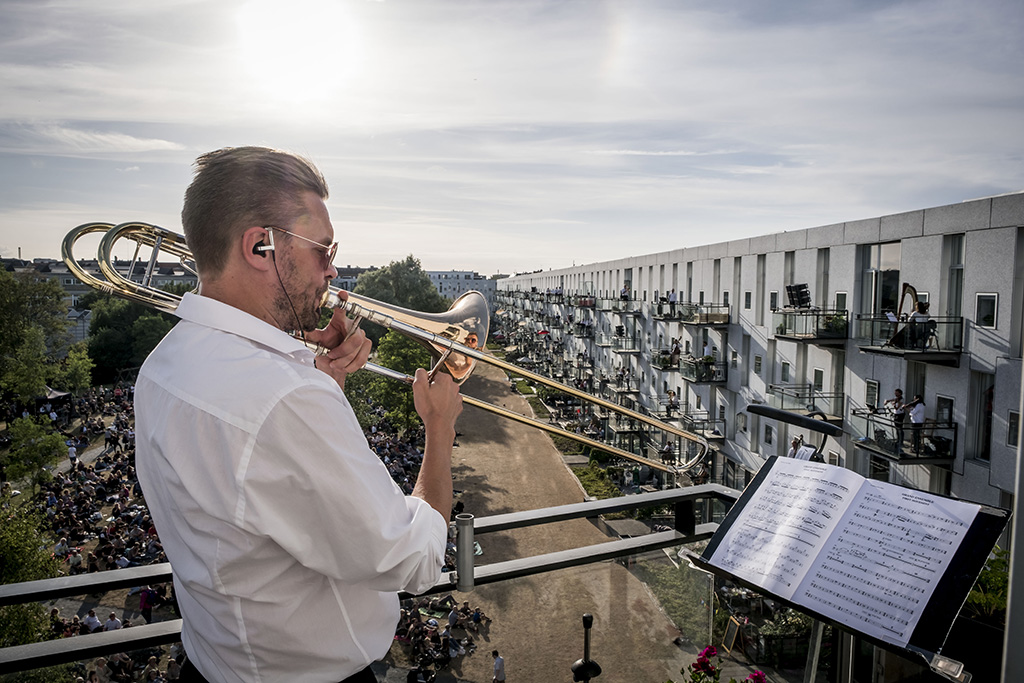