Erica Månsson is working in the field of Arts and Culture, cultural policy and cultural heritage, just to name a few. She is the CEO of Nilsson and Månsson and also the founder of Swedish network for cultural planning. Månsson has done master plan development based on cultural planning and sustainable development with different municipalities and museums in Sweden. She also reported from the Swedish cultural planning laboratory, which has been running for three years and included 11 municipalities. The aim of the laboratory is to develop a method, collect a knowledge base, to network and to create co-operation with universities. 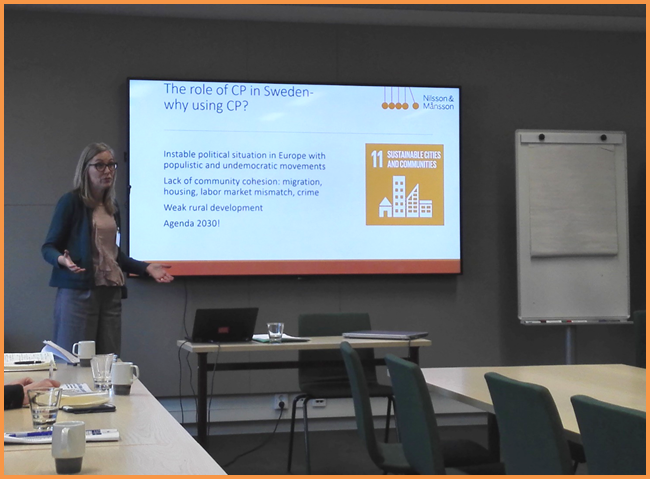 Erica points out that there is a strong link between cultural planning and UN’s sustainable development goals, which makes cultural planning stronger as a concept, as it is brought to a bigger context. In several areas of Sweden there is found lack of community cohesion and variety of challenges like integration, housing, crime and week or uneven rural development. The idea behind joined cultural planning organisations is to spread humanistic method, focus on people and bring the local authorities together to create social sustainability and sustainable city development.

Månsson introduces cultural planning as a method to be used in cities. As an example of cultural planning, she presents Tranås 2040, a case that is still on-going. The mission in Tranås is to elaborate a long term vision for the community. The aim is to add a cultural perspective to the master planning level and also to the city vision, and eventually produce an overall vision for Tranås. The vision, called Tranås 2040, will work as a frame for all planning in the municipality area, both rural and urban areas.

Tranås is a small community of about 19 000 people located between Jönköping and Linköping in the south of Sweden. There is a strong industrial base which includes approximately 12 % of Swedish furniture industry. The stakeholders of Tranås 2040 are local authorities such as municipality council, municipality officials, all citizens and every other local including the field of furniture industry and all other companies and organisations. A decision by the municipality council needs to be done to get the vision launched, so politicians are important stakeholders early on.

Månsson´s approach to cultural planning method is both democratic and humanistic.

Cultural planning, as presented by Månsson, is about doing in co-creation with the locals, so the stakeholders are linked in on the process right from the start. It is important to get everybody on board, have thorough data collection and mapping done and get the political commitment in order to success. Månsson stresses that cultural planning brings people from different perspectives together and narrows the gaps in society. It offers a bottom-up perspective which creates social sustainability to the community.

The process she used includes three separate phases: First, data will be collected from different cultural sources; second, focus groups will be set; and third, cultural mapping will be done. Data and statistics will be collected for example about artists, cultural institutions, ethnical groups, unemployment rate, trade and business field.

Focus groups will be set in order to run workshops so commenting of the process will be carried out in co-creation with the public and the authorities. By using cultural mapping, a numerous amount of data about the place is gathered and put together.

For example such things as meeting points for young people were identified, and they found out how the community is generally described among people and what is considered typical about Tranås. It is also important to identify the cultural heritage of the community, both visible and hidden heritage, and also the values that locals have.

As challenges for Tranås, this has been identified so far:

Some opportunities that have been identified in Tranås during the process are:

All of this has been identified by using cultural planning and mapping. The vision, Tranås 2040, now includes a target to increase community´s population with 1000 inhabitants by the year 2025. The community is visioned to be within a good distance both from the city and the airport, by the beautiful lake side and have relatively good economy with individual boutiques and active industrial field.

The mapping process is still on-going and it will end in August 2018. The analysis will then be run trough the project group and also politicians will be involved. Later the vision will be approved by the municipality council. The launching of Tranås 2040 is carefully selected: It will take place on June 6th 2018, the Swedish national day, which is also anniversary of Tranås, 100 years as a city.