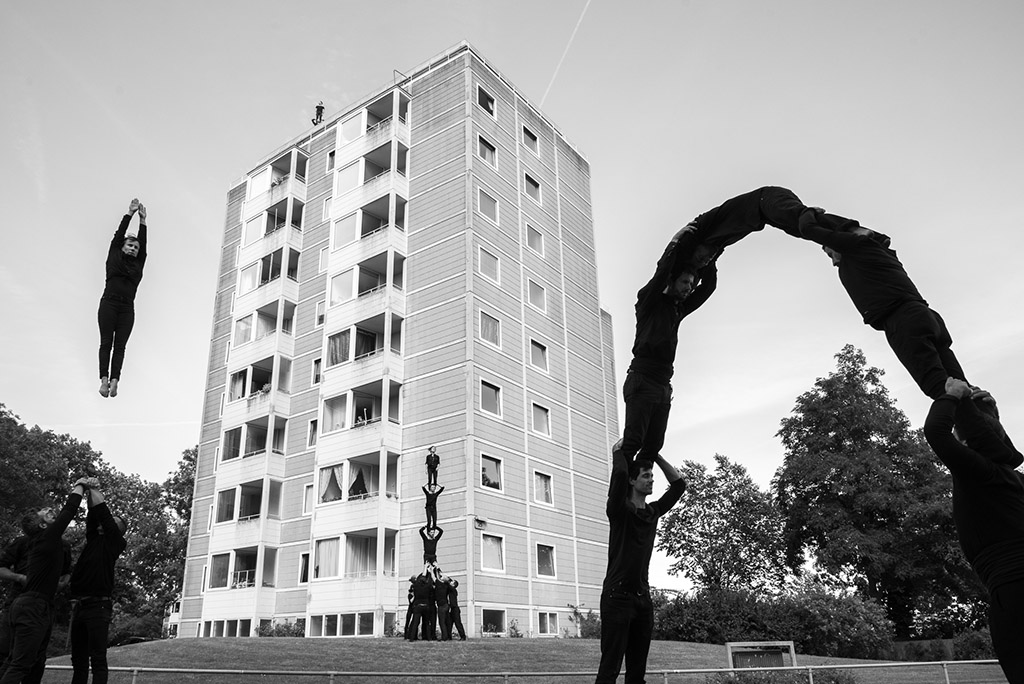 THE VOYAGES by Compagnie XY – part of Move It!

For a week in August, Bellahøj is transformed into a setting for wondrous and unpredictable encounters with 25 amazing acrobats. Right at the top of Copenhagen, amid the towering high-rise buildings and green parks, a bunch of black-clad pair-acrobats appear as eye-catching mobile sculptures. On lawns, in stairwells, on balconies… Two men tall, three men tall. Like human bridges across footpaths, or as a staircases built of bodies.

Every day new scenarios. And every day a new invitation to join. Because they do not work alone. They infiltrate an area by inviting the residents and visitors to take part in the acrobatics. An outstretched hand, a smile, a nod. The mute acrobats communicate through physics, and the human contact is the essence of their art.

It you accept the invitation, they will literally carry you on hands and feet. Many of us have not been carried since we were very young, so it feels quite special to leave your weight in the safe hands of a stranger. Like being a child again.

Compagnie XY rebuilds Bellahøj using people as the foundation. A temporary architecture where solidarity is the foundation. Confronted with the bombastic Le Corbusier-inspired architecture, the acrobats build fragile structures of bodies.  Faced with the permanent, they create fleeting moments of poetry, humour and compassion. They bring movement to the stagnant, feelings to the numb and create adventures in the midst of everyday life.

On weekdays you can meet the 25 acrobats between the buildings, where each day they will invent new spontaneous acrobatic activities with the people and buildings that inspire them. The daily programme for these activities will be published later.

Saturday and Sunday everyone – acrobats, spectators, residents – meet for the culmination of the week. A magical, magnificent performance with all 25 fabulous acrobats. And those who have had their appetite whetted during the week may also lend a helping hand. With the collective’s absorbing appeal, they suspend time, place and gravity in a spectacular staging that raises Bellahøj sky-high.

Compagnie XY is one of France’s and Europe’s vast contemporary circus companies – both in number and artistic capacity. With their collective creativity, they have created performances for all the biggest stages and festivals around the world since 2005.

Flying and falling is run-of-the-mill for the 25 acrobats. Together they reinvent the pair acrobatics, the circus traditions and set new boundaries for what is possible. A sublime three-dimensional universe, where superior physics and artistic courage is paired with the desire to create real relationships with the audience.

A couple of years ago, they began experimenting with improvisations in public space. Here they could cast off the limitations of the stage and get in close contact with people. They met people on the street that they invited to join, thus creating the methods behind THE VOYAGES. A common human language based on the inner essence of pair acrobatics – the human exchange of weight and contact. A performance that meets its audience, not the other way around.

At Bellahøj, where the traditional circus marks the coming of spring every year, Compagnie XY picks up the thread and pulls the circus out of the sparkling arena and into everyday life – with the extraordinary magic and the wild buzz intact.

THE VOYAGES is part of MOVE IT! – a week of activities that challenge physics, balance, movement and gravity through workshops and performances.

”Their acrobatics describe an ideal world where risk-taking, generosity and solidarity rule the roost… ’alone we go faster, together we go further’” Le Figaro