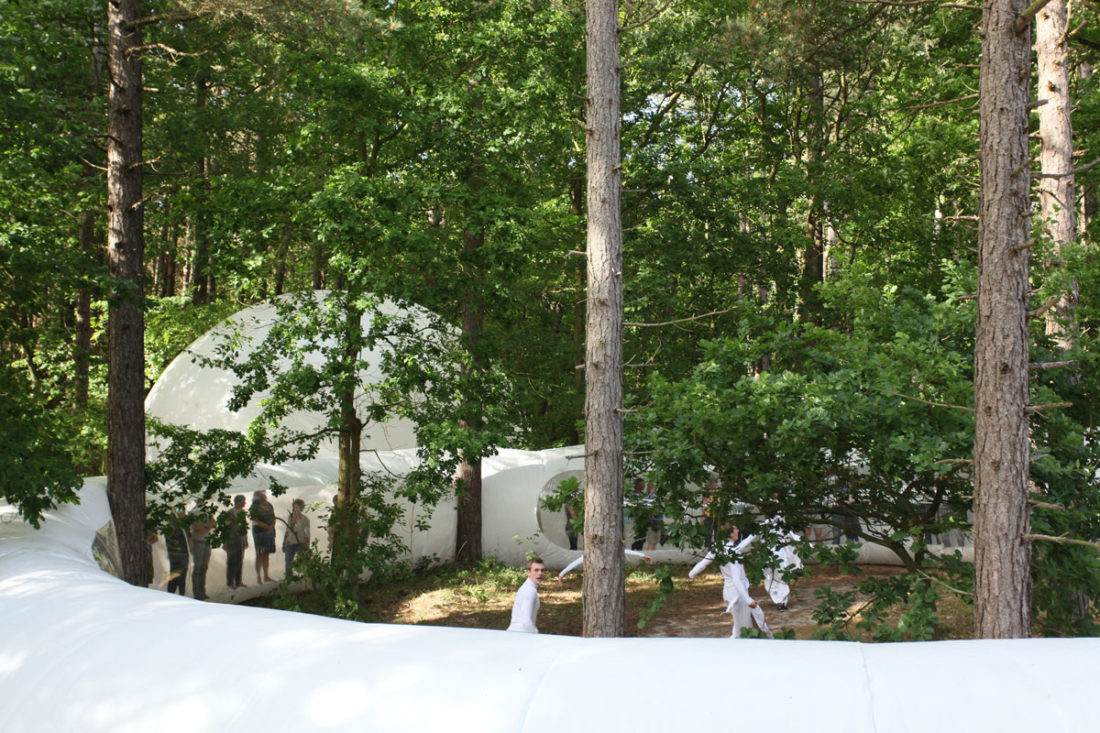 With a background as an urban and cultural geographer David Pinder stresses the city and urban spaces from a perspective on temporary uses that is pertinent in a cultural planning approach. Pinder is a Professor of Urban Studies at Roskilde University, in Denmark.

Marco Canevacci is the co-founder of Plastique Fantastique, a collective based in Berlin that plays with spaces in the city, transforming them temporarily with urban interventions.

Marco Canevacci has a background in architecture and his studies in Berlin made him see the city go through stages of change, which formed his approach to urban space.

Plastique Fantastique has done many different projects that resulted in the use of the inflatable installations in festivals, cinemas etc. and even in a church. Their work has been seen worldwide in different urban contexts, like city squares squeezed between two buildings.

The one project, that Canevacci emphasized during Nordic Urban Lab, was Loud Shadows (Liquid Events) where the collective worked with the performance festival OEROL that took place at the remote island of Terschelling (The Netherlands, 2017). Canevacci starts describing the project with the words “If you can do it in the forest, you can do it anywhere”.

He explains how working in urban areas is easier than in the nature, because you are forced to be aware of the blocks and buildings or the bench on the pavement. In a forest you only have your point of view, where you can play around with the shapes of the nature.

The project in Terschelling demanded different spaces to accommodate the fluid movements of the dancers. The design of the architecture was led by nature itself considering the position of the trees as the festival site was located within the Formerum forest. It made it possible to make four different stages that could integrate with the environment. 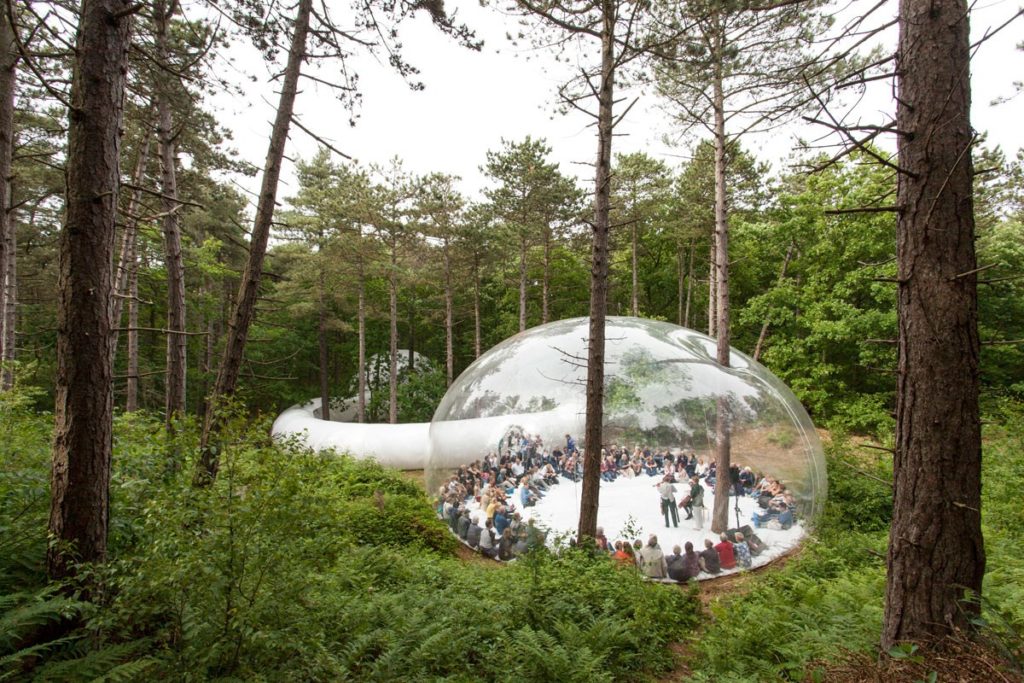 The third stage is a transparent spherical hallway which creates a spacious void for performances. The fourth stage is the surroundings of the inflatable installation. Because of the way the three objects connect to each other it makes it easy for the visitors to move freely inside and around the installations. Canevacci also describes how nature became a part of the performances.

During the presentation at Nordic Urban Lab, Canevacci brought up different ways of using the installations in urban space. He categorized eight methods with different approaches to the urban context. But he pointed out that every project you’re working with is going to be different because you have to take into consideration the urban space you’re in when designing:

The extender-method was used in the project SINESTESIA in Madrid (2013). The project strived to expand the concept of public and private by having the installation coming out of a building. The installation was transparent but made it possible to emerge yourself into, and made people engage with the project. 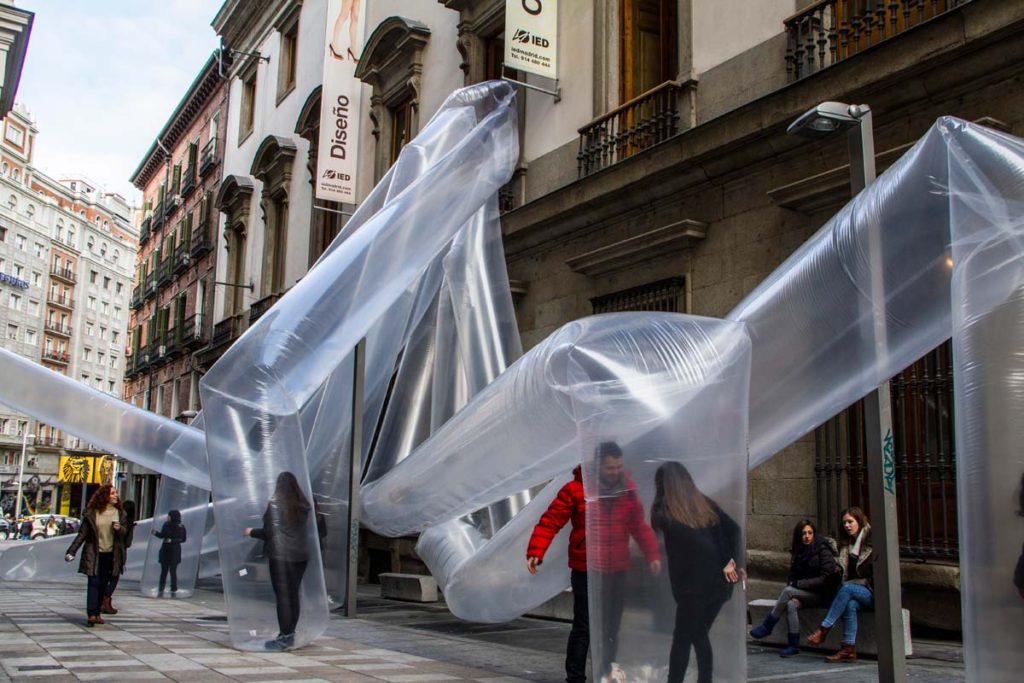 The eater-method was used in the project superKOLMEMEN (2016). It was a temporary urban intervention in the center of Helsinki and the projects goal was to design an info point in town. For this they chose the statue ‘The Three Smiths’ in the middle of Alexandersgatan to be able to convert it to a space where people could get together. Canevacci described the architecture as a “carnal love” where the installation were eaten and eating at the same time. 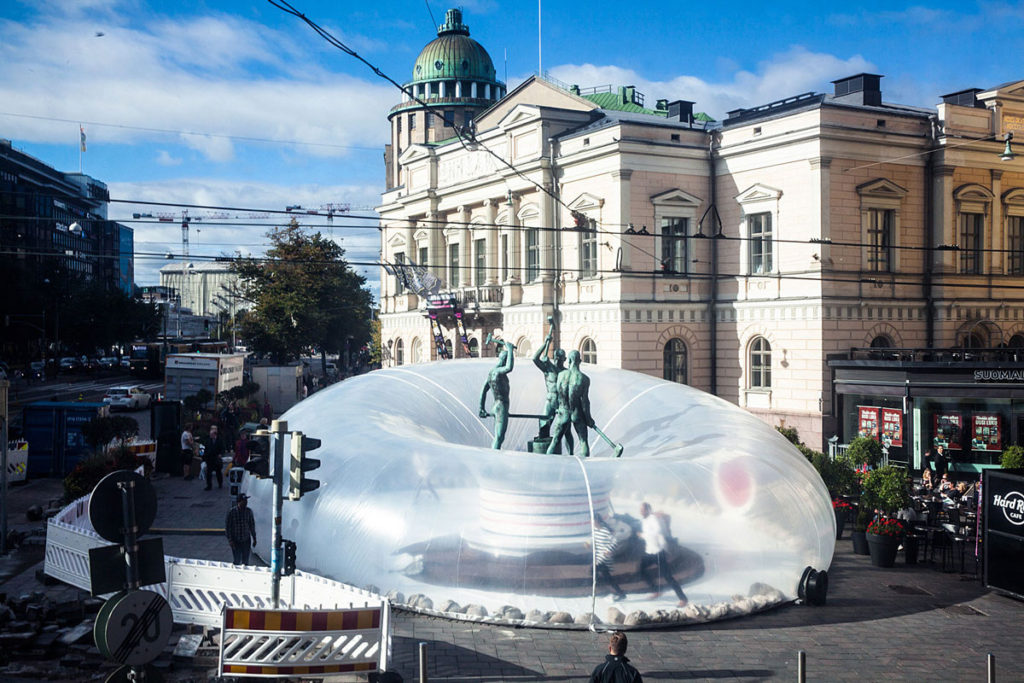 In the third method Canevacci brought up, the piercer-method, he used during the project KARL MARX BONSAI in Berlin. With the installation they wanted to create an inflatable flower pot with a tree inside to change the proportions in how we see the urban space. Inside the flower pot was a trunk, a garbage can and three benches were merged into the space and amplified by sound from Lorenzo Brusci and Marco Barotti.

The sound made the thin plastic vibrate as you would touch it, making it feel like the architecture was living and breathing. Canevacci explained how the small border of what is inside and what is outside makes a clear differentiation of public and private space, even though you’re only separated by thin plastic. 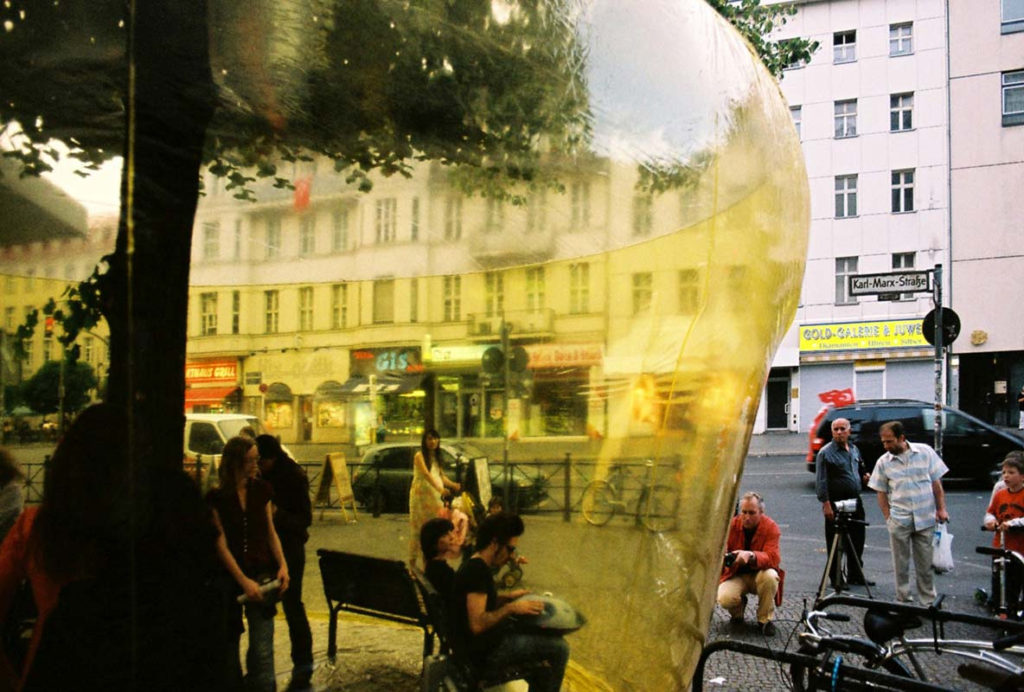 To Structure Change and Flexibility

In Pinders presentation at Nordic Urban Lab, he elaborates the 1060-70’s view on the use of space through nomadic and mobile homes. He presents different aspects on the subject through the avant-garde architectural group of Archigram, who was based in London and the french architect, urban planner and designer Yona Friedman, who was influential with his theory of mobile architecture in the late 1950s and early 1960s.

Pinder wants to raise broader reflections and critical questions about the recent interest in instant urbanism, mobile and temporary architecture.

Pinder goes on by explaining how the mobile and temporary, often is associated with an emphasis on use and Pinder points out an exhibition on instant urbanism at the Danish Architecture Centre (DAC) where they said: “The social consequences of contemporary urbanism call for temporary and mobile solutions, spontaneity and social innovation in creating architecture and urban spaces” (2008).

The exhibition gave a variety of different projects and initiatives that included work for mobile cinemas, plug-in art and more. Pinder stresses two main projects from the exhibition: Lucy Orta’s project ‘Refuge Wear’ from 1998 and Michael Rakowitz’s famous inflatable shelter, ‘paraSITE’, for homeless people from 1998. Pinder explains how the accompanied text from DAC referred to how it may be possible to redefine the city in alternative ways and how some of these past urban visions shows an interest in the temporary and mobile.

Are we Forced to Move?

Pinder then continues with turning to some of the early mobile visions with questions like: “How are some of their representations on mobility imbued with the emancipatory intent? How are they set against the modes of regulation in ordinary space? To what extent are these visions often imbued with this idea of mobility somehow aligning with freedom or emancipation?”

The 1960s is a period of experimentation and Pinder talks about Archigrams ‘WALKING CITY’ from 1964 as a project that embodied the questions on how architects and urbanist could develop more mobile spaces that could accommodate change and movement. But also enable more flexibility of use.

Pinder also brings up a quote from Archigram where they said: “Cities should generate, reflect and activate life, their environment organised to precipitate life and movement”.

The idea was that spaces then provide a flexible infrastructure that could be plugged in to, allowing the environment to be structured for change. That houses for example would be imagined to be individually customizable and mobile.

Archigrams emphasis is on mobility and flexibility, which was a wide shift within architecture in the 1960s. How the mobile structures are a way to give the form over to the users. Pinder then continues with Yona Friedman and his take on mobile architecture and urbanism in the late 1960s and how he emphasised the questions about improvisation and user involvement.

Pinder’s presentation brought up questions about how the nomadic and mobile homes can be seen from different theorists and architects. How it can let some people move freely, but others are left feeling they are forced to move.