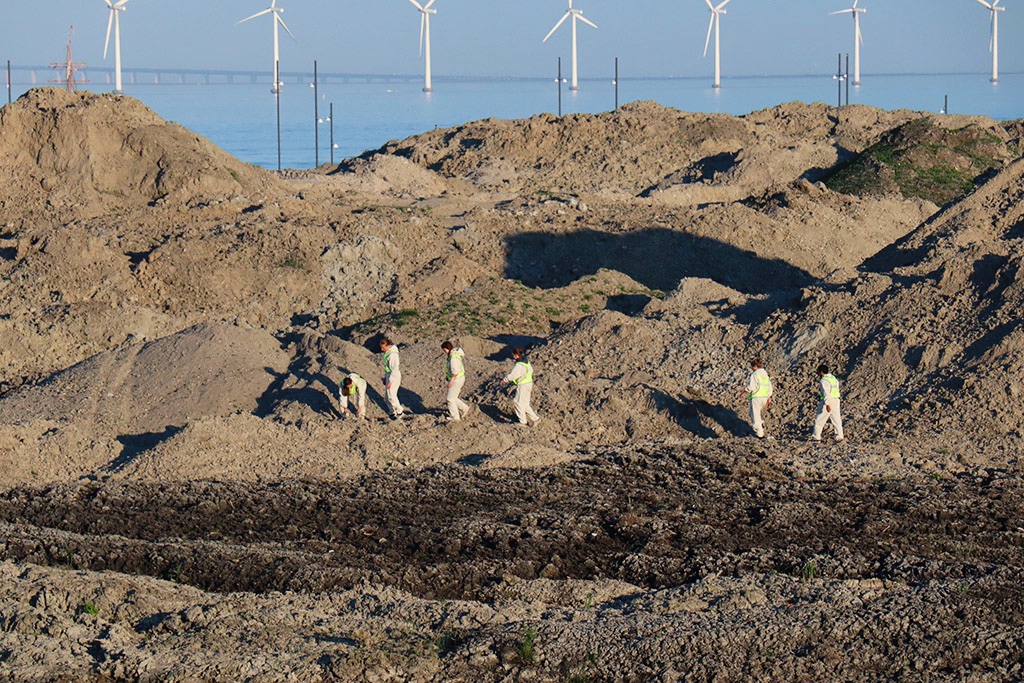 Throughout the last year, Nana Francisca Schottländer has explored and worked in and with the soil depository on the furthest area of Copenhagen’s Northern Harbour – a completely new territory created by excess soil from the diggings of the city development. A landscape of ever constant change in a living choreography between earth, humans, machines and all other life forms appearing in between.

Species materialize. Birds migrate and nest. All sorts of seeds and plants sprout. Snails and frogs enter little water reservoirs. Fish move in alongside the bastions, and people start exploring the area. Alongside this, the space is ruled by development plans, bulldozers, and trucks in the shaping of our future city and landscapes.

HABITAT + BODYSCAPING takes a curious yet critical stance towards the dynamics which drive a development like this, and step straight into the process of shaping a landscape as it is happening.

During the process, several artists have been invited to partake in the dialogue with this hyper-anthropocene landscape. These meetings have led to three intertwined projects: the exhibition HABITAT +, the performance BODYSCAPING as well as a publication. 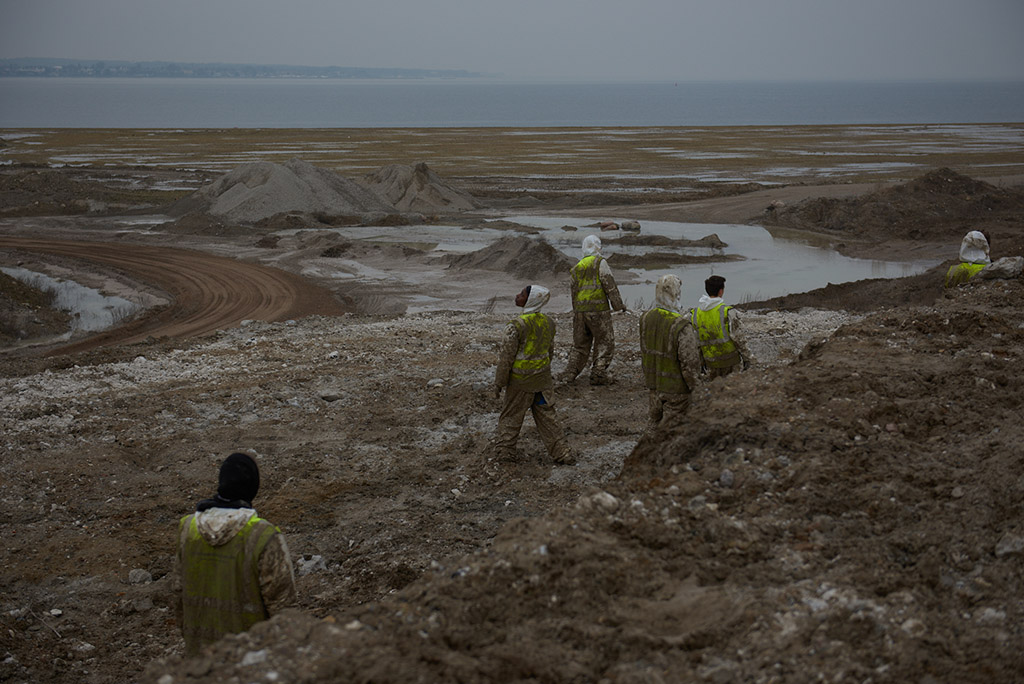 You are invited to step behind the closed barriers to experience and explore the soil depository, when BODYSCAPING sets the human body into contact with this astonishing landscape.

A group of people walks slowly across the terrain, like one united organism consisting of separate bodies. Fingers, arms, legs act as tentacles, registering the landscape. The flock moves slowly across piles of earth, coming to a halt at the very peak to sense the wind, the sky, the distance.

Between bulldozers a group of people is crawling, tiny among humongous machines. Further out a group is lying on the ground. Hands and face encountering the earth, pebbles, plants up close. The contours of the bodies and their movements become an elongation of the landscape itself.

The human body is your body. The performance takes place in the encounter between your body and the soil depository’s many shapes alongside the others in your group. A guide is leading you through the landscape in an investigative manner, a choreographed journey into the soil depository to encounter the lives and themes quivering among the landscapes, allowing our presence to sound in the choir of resurrection and decay, of anchorage, transit, and new tales of life.

Duration: 4 hours incl. introduction, change of clothing and round off
Recommended age: 15 +
Language: Can be experienced in both Danish and English
Important info: The performance will take place in a compound not usually accessible to the public. Please be prepared to crawl, dig, and get into close physical contact with your surroundings. Wear shoes and clothes in which you can move, crawl and run, and which can endure becoming VERY dirty. Protective suits and reflective vests will be handed out and are required on the grounds. Participation is at one’s own risk.
NB! For each performance there will be a group accessible to all whom have difficulty walking or for some other reason might want a less challenging experience physically. 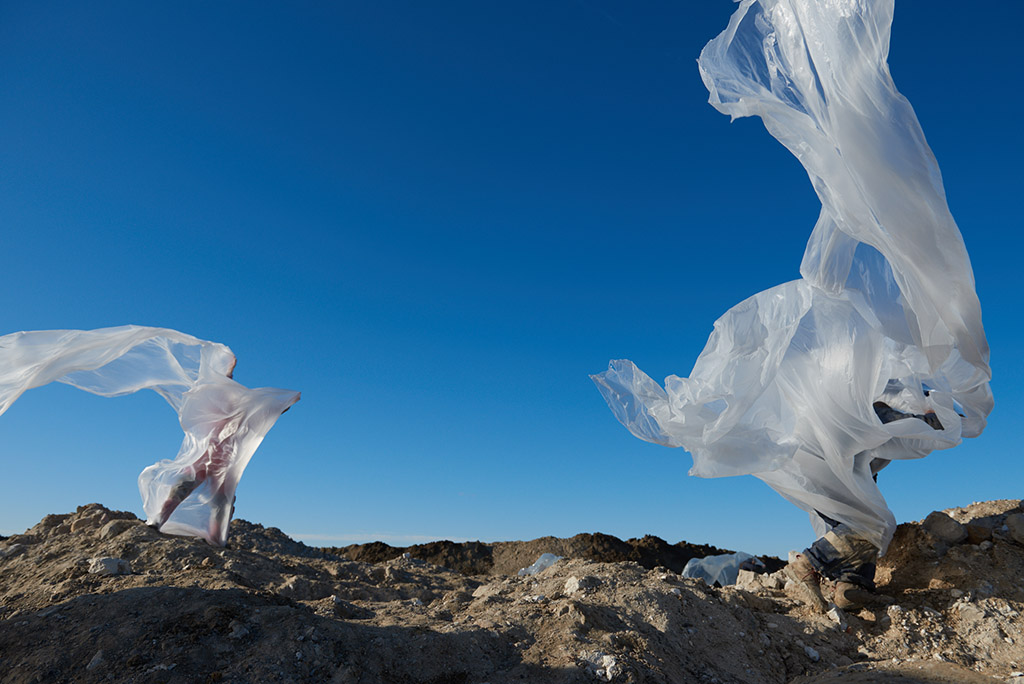 As part of her work with the soil depository, Nana Francisca Schottländer has invited several artists in the fields of performance arts, photography, video, sound, and installation to join her. This has amounted to a series of art works which will be exhibited at Tunnelfabrikken – the colossal hall of Copenhagen’s Northern Harbour, in which the compounds for the Øresund tunnel have been moulded.

The exhibition explores the soil depository and the many themes of the site through art works and installations, which incorporate the space and structure of Tunnelfabrikken, all while signalling the mesmerizing and ever-changing landscape outside.

150 tons of earth is making a migratory layover at Tunnelfabrikken before reaching its destination at the soil depository. Semi-mythological creatures made by visual artist Ari Lin Sixten will be presented and balance within this constellation. The landscape will resonate audially through compositions made by Jacob Kirkegaard in collaboration with Nana Fransisca Schottländer of recordings of real sounds from the area.

Inside the old structures, where the parts for the Øresund tunnel were moulded, objects and material from the soil depository will balance in new compositions, narrating the materiel encounters of the landscape as staged by Lise Bjerre Schmidt and Nana Francisca Schottländer.

The raw space of a container constitutes the frame of the recorded meeting between landscape and bodies, created as a collaboration between Nana Francisca Schottländer, video photographers Ingerlise Øllgaard and Mikkel Ulriksen, and the performers in BODYSCAPING.

Photographer Marine Gastineau has been following the project from winter throughout spring and captured moments from the work with the landscape in pictures featured as part of the exhibition and printed in the publication.

The pieces are trembling from the various layers of stories, conflict, potential, and displacement between meaning and material, which all coexist within the space of the soil depository. Each forming a fragment in the new narrative of the birth of a landscape.

The performance BODYSCAPING starts and ends here in the exhibition. 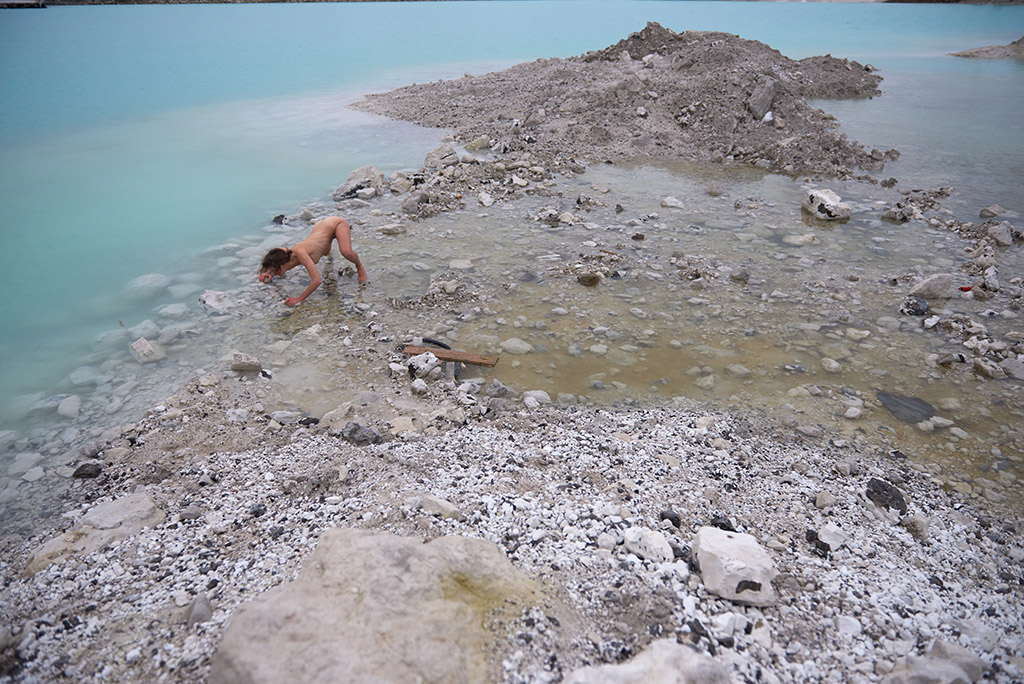 Drawing upon current themes of cities/humans/nature/materiality, Nana Francisca Schottländer has collaborated with Andrea Fjordside Pontoppidan and Ari Lin Sixten and assembled a collection of texts, which treat the soil depository from perspectives of poetic, intellectual as well as fantasizing formats.

The publication is included in the ticket price for BODYSCAPING and can also be purchased at the exhibition as well as select bookstores. 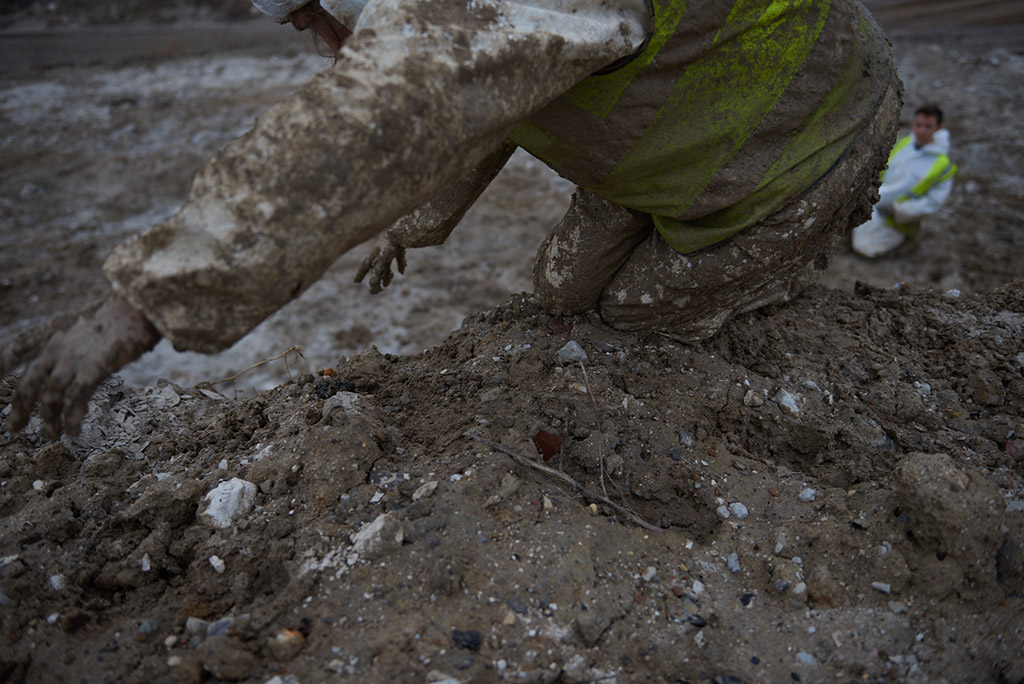 Nana Francisca Schottländer has a background in dance and performance. She works with investigatory, hybrid formats in the cross section of performance, choreography, visual art, and written words, often in collections of work stretching throughout several years. Her work is often created in dialogue with specific places and engaging audiences in collaborative processes, exploring our existence within this world.

The past five years, she has worked with modes of engagements and co-creation in the meeting between landscapes and non-human forms of being. Nana Francisca is driven by curiosity and explores ways in which she can challenge the human-centric perception of our surroundings, and instead propose other bodily ways of understanding how and why we exist, across species, across existence.

Nana Francisca has created larger projects by Vadehavet in collaboration with Nationalpark Vadehavet, in Thy with an exhibition at the new Statens Museum for Kunst Thy, and in Silkeborg with an exhibition at KunstCentret Silkeborg Bad. Every landscape possesses its own qualities that she, in collaboration with other artists, seek to approach and engage with. HABITAT + BODYSCAPING is part of the ongoing collection of works, Landscape Bodyscape Relationscape.

Produced by Metropolis – Københavns Internationale Teater. Project is funded by Bikubenfonden, Metropolis, Københavns Kommune, Tunnelfabrikken, In Situ, and others.

Nana Francisca Schottländer is as an artist connecting to IN SITU, a European platform for artistic creations in public spaces, under the project (UN)COMMON SPACES, supported by Creative Europe, a programme by the European Union. 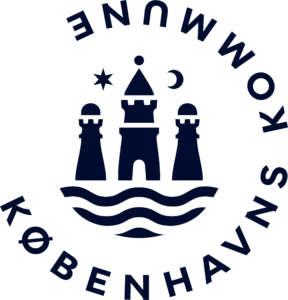