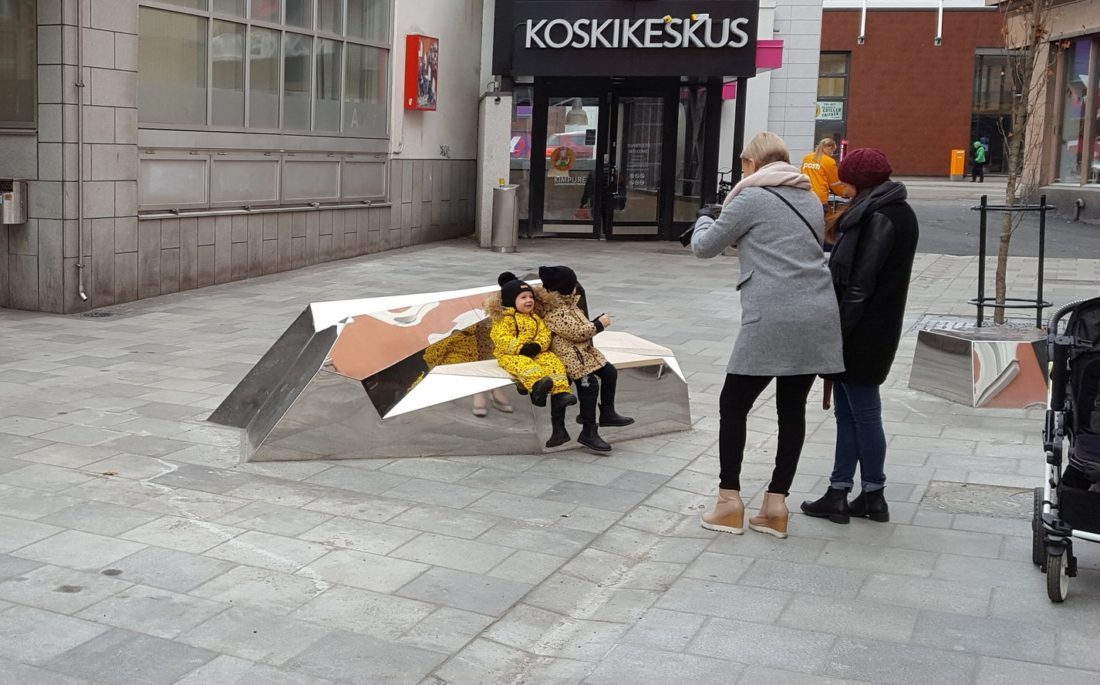 Cities Are Ours – The Public Space

Maija Kovari has a background in visual arts and architecture. She began to work as an artist, mainly with sculptures and installations. After a while she started working for a large urban planning company called Ramboll, in which she realized there was a big lack of artistic collaboration in many urban planning and design projects. After writing her thesis about the topic, she started her own company: Public Art Agency Finland, in which she specializes combining the two fields; contemporary art and urban planning and design.

Jadwiga Charzynska, is director since 2004, of Laznia Arts Centre for Contemporary Art in Gdańsk. Since 2012 it consists of two buildings, referred to as ‘Laznia 1’ and ‘Laznia 2’. ‘Laznia 1’ is the one closest to the touristic area, in which most of the contemporary art exhibition take place, while ‘Laznia 2’ is further out of the city centre. At ‘Laznia 2’ you can find residential programs, a small cinema and classes/workshops are held there.

At Nordic Urban Lab Maija Kovari mainly introduced a project in which she was part of a street design team as an artist, while still working at Ramboll. This project took place in Tampere, Finland.

The project focused on changing a small pedestrian walk in Tampere, Finland. Maija Kovari wanted to show the possibilities of making small artistic interventions in the urban planning, without the overall budget changing. She became part of the street design team at Ramboll. This way she was able to try out her first ideas for the place in 2015.

The aim with the project was to implement art in urban planning, and to involve the public and create some sort of civil dialogue, by letting the people vote for their favorite idea. The idea which got the most votes, was the idea that was implemented later on. To engage the public, the users of the space presented three different ideas and let the public vote.

Based on your case, what were the most important in regard to create a good cultural planning process?

“Bring the artist as close to the other design professionals as possible”, Maija Kovari (FI)

During a period of time Maija Kovari tried three different designs, which would not affect the budget that much in comparison to “normal” solutions. All three ideas were presented to the public, whereas they got to vote, and the one idea that got the most votes was the one they implemented.

The first idea was a design that showed the infrastructure of the water pipes. The idea behind was that the distribution of water was one of the first things to think about in early days of city planning, thousands of years ago. Since then, water is something we often take for granted, and Maija Kovari wanted to show the hidden value – and literally hidden role – of clean water in our contemporary western cities. To fund this work, instead of using natural stones to pave the street, the idea was to use concrete pavement. By doing this, money would be saved, which would be enough to fund the art completely and also leave money left aside. But the city of Tampere felt that it was a central area, and their quality standards said they should use natural stone.

The second idea was to implement old games and engrave them into the stones. So in pedestrian areas people could approach the city more playfully. The cost of engraving one stone was about EUR 400, so compared to the overall budget for the street it was nothing. An easy way to implement art into the urban planning, without costing a lot of money.

The third project was art made out of polished steel, which can be used for sitting on. Since it is a pedestrian street, there would be benches, so why not change one of the ordinary benches for an art piece you can also use as a bench. This was the idea the majority of the public voted for.

The work was concluded by Ramboll, commissioned by the city of Tampere and supported by Foundation for Public Art.

At Nordic Urban Lab, Jadwiga Charzynska, mainly focused on the project Outdoor Gallery of the City of Gdańsk, in which she is curator and part of the jury.

Outdoor Gallery of the City of Gdańsk is an art project which started in 2004. It is situated in the lower town, within the same district of Gdansk as Laznia 2. The project is managed by ‘Laznia Arts Centre for Contemporary Arts’, as a part of a broader picture, aiming to activate and implement art in these areas of Gdansk.

By introducing and realising different art projects during several years, the goal for ‘Laznia Arts Centre for Contemporary Arts’, is to be part of the transformation, both social and architectonic, in the lower town of Gdansk. They aim to implement art and engage the locals in the areas, and hopefully also attract tourists to go there.

The projects are orientated around different parts of deprived areas in lower town of Gdansk. They hope to revival these areas and by implementing art, strengthen the communities.

The project is mainly divided into two important elements: One is to offer a wide range of local, educational activities, while the other is to create international competition, from which they hope to create more permanent collections of art in the urban spaces. The first project to win the competition in 2005, which became realized in 2008, was the project LKW Gallery by Daniel Milohnic & Lex Rijkers.